Housewives and Other Reality TV News by BB

Real Housewives of New Jersey:  Caroline Manzo tells US Weekly she hasn’t seen Teresa Guidice since the Season 4 reunion, but seems to be planning to take the high road as Season 5 has begun filming.  She states, “It’s nice to be able to be civil and say, ‘How are you? How are the children?’ That’s it.”  Sister-in-law Jacqueline Laurita added the cast is in a better place with Guidice and they are big girls and can co-exist.  Who do they think they’re fooling?  I predict this cease-fire will be very short-lived.  Read more here.

Shahs of Sunset:  TMZ is reporting that self-proclaimed model Niki Ghazian has sent the Bravo honchos a cease and desist letter claiming they have no right to use the term “Persian Barbie” for its newest cast member Lilly Ghalichi.  She claims various publications have used that term to describe her since 2005.  She wants Bravo to stop using it in their ads, on their website and in any other press releases.  Read more here.

Yolanda Foster:  While cruising the internet, I came across this Youtube link showing portions of Yolanda and David Foster’s wedding and reception on 11/11/11.  Too bad they are already married because I would have loved to have seen this on the Real Housewives of Beverly Hills.  They sure know how to throw a fancy star-studded soiree.  Jackie Evancho and Eric Benet (former Halle Barry squeeze) were just two of the performers there.  Take a peek into the lives of the rich and famous.  http://www.youtube.com/watch?v=XwnTSfZbLbA

And that’s not all folks.  Did you know Yolanda has a music video?  She sure does.  Her voice is pretty good, but I seriously doubt she has aspirations to be the next Melissa Gorga, Luann De Lesseps, or Kim Zolciak.  It’s been reported Yolanda made this video as a wedding gift for David.  Enjoy (or not). http://www.youtube.com/watch?v=5LvobqBG_8c

Real Housewives of Atlanta by RamonaCoaster

Kim and her daughters are eating pizza in an outdoor restaurant. Pizza is Kim’s favorite food.  Kim’s daughters love moving back to their townhouse.  They joke about what the press has reported about Kim’s eviction that she lives with her mom or they are out in the street. Kim’s daughter want Kim to start using birth control. They all need to somehow  fit in the townhouse.

The lawyer and her husband go on a double date with Kenya and her mystery man, Walter.  Kenya notices Apollo is rather good looking.  Apollo returns the compliment lauding her on her producing skills. Someone’s not liking their personal admiration for each other. Kenya thinks he’s checking out her abilities. Kenya is really excited about go- carting.  Kenya’s a daredevil. Walter is complaining about his slow car.  Apollo beats Kenya at the finish line and Kenya complains she ran out of gas.

Cynthia and Peter finally open a $200 bottle of wine that they saved for 4 years for a special occasion and it tasted spoiled so they poured it down the drain.  Nene and Gregg are at the door. 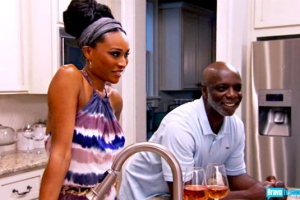 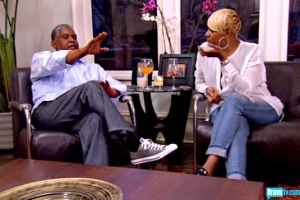 Peter joke that they should get a divorce and then be happy together.  They talk about a going on a couples’ trip (Vicki just had an aneurysm).  Cynthia brings up asking everyone including Kim and Troy.  Nene says again that despite Kim leaving her success party early she doesn’t care. (Thou doth protest too much). Once Cynthia leaves the room, Peter whispers an idea to Gregg and Nene to surprise Cynthia with a vow renewal on the beach.  How long have they been married for? 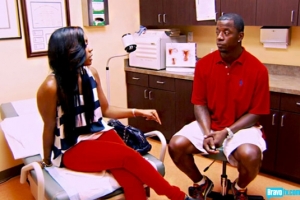 Porsha and Kordell go to the Dr.’s office. Porsha had a miscarriage recently because she had uterine fibroids and there was no space for the baby to grow.  She wants 2 sets of twins so she only gets pregnant twice. There are many family members who have had twins so it is both their gene pools.  Porsha believes if you eat a whole lot of a certain type of yams it increases your chances for having twins. So says some website about some village in Africa. Porsha has an ultrasound and the doctor gives them the okay to have lots of yams in a month.

Kandi is meeting Cynthia at another outdoor restaurant.  Crabcakes! Yum!  They talk about how Cynthia’s booty is getting bigger.  Cynthia brings up going to Anguilla and Kandi gives some excuse about Todd not being able to go. Todd apparently doesn’t like the drama that these ladies bring.  Kandi feels it is going to be strange with Kim and Nene on a trip. Kandi feels Nene has some ulterior motives for doing things. Cynthia tells Kandi that Nene feels Kandi doesn’t like her.

Nene and Cynthia are going to Porsha’s house to discuss their charities. Porsha and Nene knows someone in common named Afemo. When they get around to discussing the Hosea Williams Foundation, Nene laughs when Porsha says the Foundation doesn’t just feed people during Thanksgiving but 265 days of the year.  Porsha invites them to do an event together.  Porsha after serving some alcohol asks them if they know Kenya Moore.  (She’s not completely stupid – she knows alcohol loosens lips).  Cynthia tells Porsha her story about Kenya then Porsha tells her story about Kenya. This makes Cynthia happy because it validates that she’s not crazy and she has an ally. Nene likes Porsha and got some good vibes off her. Nene will check Kenya out.

Kandi and the lawyer go shopping for home stuff.  Kandi brings the lawyer some Kegel balls to tighten her vagina.  Kandi has been running around Atlanta with balls in her vagina. The lawyer wants to smooth things over with Cynthia before they leave for the trip.  They discuss inviting Kenya on the trip.

Cynthia is meeting the other 5 ladies at a restaurant to talk about the Anguilla trip.  The lawyer brought Cynthia a huge bouquet of flowers and an apology.  Cynthia feels that she wouldn’t have apologized if there wasn’t proof on a phone.

Kandi then shows up and tells them she invited Kenya to come to lunch and the trip. Cynthia is not happy. Kenya and Nene show up and Nene asks if Kim’s coming. Kim is the last to show up looking really pregnant.  Nene thinks Kim came in with a pillow in her stomach for drama.  They discuss the trip and Kenya asks Cynthia if she is invited. Then she says she is inviting herself. Cynthia doesn’t have the balls to tell Kenya no. (She should ask to borrow Kandi’s balls). Everyone is going except Kim because of her new pregnancy.  Nene’s blood pressure is going up because of Kim’s excuses.  (Shouldn’t she be happy?)  Kim goes into a whole song and dance about how the trip is close to her due date and how she has a short cervix and how she had just been pregnant with KJ and that she would love to go but can’t.   Then Kim tells them she is going on vacation with Troy at the same time.  All their heads are spinning.  Then Kim says she can’t travel outside the country.  So the lawyer asks Kim if she is committed to keeping and making friendships with them (aka the reality show). Cut to commercial.

Kim says she is not.  Kandi is mad because apparently Kim confirmed the dates for the trip and now she is making up excuses why she can’t go.  Nene is mad and tells Kim she makes excuses all the time over why she is not showing up to meetings with them and asks that Kim not lie to her.  Kim gets up to leave and Kim is yelling at the camera man on the street trying to get into the car.  In the previews, Troy shows up to get in the camera man’s face. Poor camera man!

Note: I had to get the blog in early today, and with the time change etc. (I’m out east for work) I couldn’t figure out how post the shows that are send to me in the a.m. and get enough sleep to function, so I’ll put them in tomorrow.  I suppose this is how it will be until I’m home on Thursday.  Have a great day.  NMD.

Happy Birthday Not That Crazy

Just a housewife ... who loves this place .... and loves to write ... You can reach me through this email: nomoredrama8@gmail.com. Lynn's Place is in tribute to Housewives blogger Lynn Hudson, who passed away in August of 2012.
View all posts by Veena (NMD) →
This entry was posted in Real Housewives of Atlanta and tagged caroline manzo civil to Teresa giudice, real housewives of atlanta, yolanda foster music video. Bookmark the permalink.