Real Housewives of Atlanta by RamonaCoaster

We are in Los Angeles when Nene tries to call Cynthia to ask what is going on in Atlanta but her cell phone isn’t working. Since Kenya has lived in LA before, she sent some furniture to Nene while she is living it up in the Hollywood Hills.  There are two statues of ladies holding up lamps and some garish coffee table.  It’s pretty hideous.  The real estate lady comes to check up on her and Nene expresses her concerns over getting settled, going to work, directions to stores and other practical matters.

Kandi and Riley are making a cake for Todd for his birthday and celebrating some milestones in their relationship.  Riley asked Kandi if when she gets older – like sixteen – she can live in the guest house. Kandi doesn’t want Riley to get out of touch with reality and she wants her to work for a living.

Kenya’s aunt Lori and cousin come over and they are shocked that Kenya is cooking real food.  I guess Kenya doesn’t usually spend too much time in the kitchen. They ask Kenya if she has good news and Kenya tells them about Walter. She didn’t feel Walter was attracted to her and treated her well.  Kenya said she had enough and didn’t want to be with him anymore.  Her cousin thinks Walter was a weirdo and revealed that she had met him years ago and he had tried to “talk” to her.  Kenya is somewhat surprised and wondering if Walter was a player.  I think being a player and trying to be a player are two different things.  Kenya’s cousin and aunt reassure Kenya that they support her. 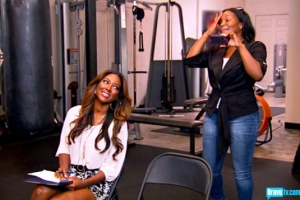 Donkey booty workout is getting started. The lawyer and Apollo are going to demonstrate the exercises for Kenya.  Kenya is excited with their creativity and their funky donkey move.  Kenya already has contacted some distribution companies and came up with a $100,000 budget.  Phaedra wants some extra security if she is going to give up that money.  They want to talk to Cynthia about casting some juicy booty extras for their video.  They haven’t negotiated a contract yet so ironing out those details is probably going to be painful with everyone trying to get the upper hand.

Nene and Gregg are talking about getting focused and settling into LA.  Nene is explaining the frame of mind she needs when she goes to work.  Gregg is going to need to step up and be “Mr. Nene.”  Gregg tells Nene to let go of some control.

Kenya, producers, the lawyers and Apollo sit down to talk about the deal.  Kenya secured a distribution deal and asked for 10%.  The lawyer heard from Todd that Kenya’s budget is too high. Kenya is insulted over Todd’s input.  They go back and forth over and in the end it’s all about greed.  Kenya feels that if she had dealt with Apollo she would have won him over.  Kenya leaves not willing to negotiate. Eric, the lawyer comes in and says he can find another production company for them.  Apollo feels that the distribution deal is pretty good. In the end, they don’t care if the personal relationship sours over the business relationship.

Nene is studying the script while driving to work.  This is pretty cool that we get to see the inside of Paramount studios.  Nene is happy to have her own trailer and excited that she can say she was a regular on a primetime show.  I hope everything works out for her.  Nene acts much better when she is secure with herself.

Kordell is serving Porsha breakfast in bed and Porsha is asking for yams.  They just might do it in front of the camera when Porsha pulls Kordell down towards her…

Kandi and Todd take a limo and Todd is asking what they are doing tonight.  They arrive at the airport where Kandi tells him they are going to take a helicopter ride to see Atlanta.  Hope he is not afraid of heights.  Meanwhile everyone is arriving for the surprise party. Kenya and Apollo talk about the deal.  Kenya doesn’t want to do the video for free.  The lawyer says she does deals for free all the time.  They see the helicopter arriving and Kandi realizes that Todd sees the party from outside so the surprise is out the door but he can still be surprised that his mother is there.  Everyone yells surprise and he is happy to see his mother.  Kandi was happy to see tears in Todd’s eyes when he saw his mama.  So cute.  The birthday cake was in the shape of a lion and Kandi explained they met one year ago in Africa and they are celebrating their first kiss and first real conversation.

Kenya then goes up to Todd to ask about the donkey booty project.  Kandi feels that they shouldn’t talk about business at the party.  Kandi is pissed off at Kenya.

Kenya is at the CynthiaBailey Agency to cast the donkey butt video.  Now Cynthia brings up that she doesn’t do pro bono work after seeing the tweet the lawyer put out for models to come to the BaileyAgency.  Kenya tells Cynthia that the lawyer made a counter offer of 0% and just a small fee after Kenya made her 10% offer.  Cynthia doesn’t like that she may not get paid either for doing the casting job.  Someone seems to be taking a page from Kim Z’s book and expect to get everything for free.

Kenya needs to have a final conversation with the lawyer.  Cynthia says she canceled the casting job because they didn’t speak about fees and she did not have any information about what they want regarding models.  Kenya feels she shouldn’t do anything for free but the lawyer points out that she is not negotiating and giving reasons why she deserves a percentage of the potential profit.  Kenya announces she doesn’t want to do the donkey booty video and walks out.

Watch What Happens Live by NoMoreDrama 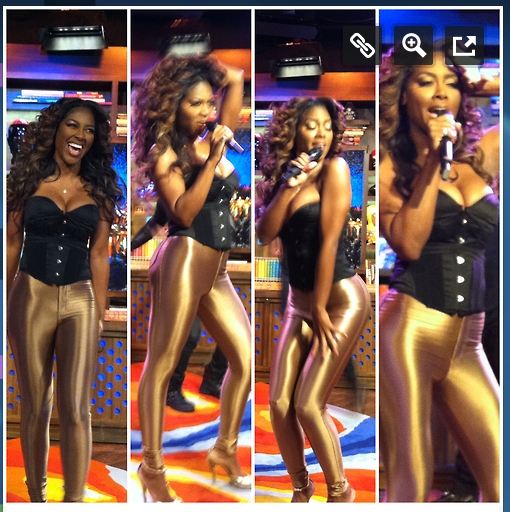 Before I get to the show, I need to share this link to all the great “hits” by the Bravo Housewives.  Please enjoy!  Heh.

WWHL Tagline for tonight:  “Frankly my dear I do give a damn”

Andy Cohen in the Clubhouse with Mercedes (MJ) and Kenya Moore.

MJ is in a yellow jump suit with bright red lips and looks really good.  Kenya is in a bright red dress.

Jodi Foster came out and seemed like she was retiring. NeNe looked great.  And then they showed a photo of Dennis Quaid (because he looked off).

Andy asked MJ if she liked how Asa’s ass looked on the show.  MJ – after first clarifying that he really asked that, said yes.

Kenya is asked about Phaedra and the video deal.  Kenya said she was surprised that Phaedra wasn’t planning on giving her any money.

Is Kenya Gone with the Wind Fabulous?

(my guess is landslide NO)

Three things Andy is obsessed with –

3)      Walter on radioshow saying their relationship was fake (Kenya say they don’t have enough time on the show to answer anything.  They were in a real relationship.  He made her look like a fool.  She claims that he retaliated against her because she said things about his sexuality.)

For MJ – Do you feel a little betrayed by Reza?  MJ – “I feel 100% betrayed.  I saw everything for the first time with the viewers.”  The purse bothered her the least of everything.  MJ says she has never abused any drugs.

Andy – for Kenya – are you still talking to Walter?  Kenya – no

Andy – for Kenya – do you have men pursuing you or running away?  Kenya – I’m fabulous.

MJ chimes in.  She thinks what happened with Walter was a blessing in disguise so he stopped wasting Kenya’s time.  Kenya yells that she’s single.

MJ – are you still with the guy from your birthday party?  MJ – yes (they were off and on but now on.)

Kenya – asked about NeNe’s comment about Kenya’s fake storyline.  Kenya – yes, NeNe said that was how she felt at the time but they are friends now.

Kenya does her song.  Honestly – she does a lot better than Kim Z or Simon – sort of like a LuAnn performance.  More performance than singing, and totally a waste of time, but I didn’t have to cover my ears.

Shoot – I missed the poll results.  Sorry about that.

End of the Year Housewives Survey by BB

I’ve put the End of the Year Survey on it’s own page in case you missed it.

Just a housewife ... who loves this place .... and loves to write ... You can reach me through this email: nomoredrama8@gmail.com. Lynn's Place is in tribute to Housewives blogger Lynn Hudson, who passed away in August of 2012.
View all posts by Veena (NMD) →
This entry was posted in Real Housewives of Atlanta, Watch What Happens Live. Bookmark the permalink.