Rumors continue to swirl that the cast of Real Housewives of New Jersey is getting along (gasp) as filming draws to a close.  On twitter, Teresa Giudice continues to tweet happy smiling photos.  She even gave a shout out of support for Lisa Vanderpump for landing the Dancing with the Stars gig.

Meanwhile her brother Joey and his wife Melissa are getting their share of magazine covers as rumors of Melissa’s alleged affair with Bryan (Bulldog) have hit the mainstream press.  Now the bigger question is who is selling these stories, and are they double-selling exclusives.  Johnny the Greek and his wife Penny the Hairdresser seem to be at the center – again.  You may recall that at the end of Season 4, Teresa and Kim D were having their hair done in Penny’s salon when they were approached by Angelo.  Penny was reportedly cut out of the “strippergate” scenes that ended the season.  Since then Johnny has been scrambling to let people know that if Penny is added to the cast, she’ll bring the drama.  He leaked stories to that affect to TVFishBowl.  You can read it through this link.  Unfortunately,  another blogger was leaked almost an identical exclusive the same day, and the writer at TVFishBowl found out that  Johnny’s stories were as full of holes as swiss cheese, so they pulled them.  Now it’s surfaced that Johnny was shopping around Bulldog’s story (keep reading that link I posted above) then denied it, leading to a behind the scenes twitter / blog war of epic proportions. Whew the New Jersey people wear me out.   I doubt we’ll see much, if any, of these on-screen, although Johnny is claiming that Penny had an on-camera phone call with Bryan that opened up an opportunity for her to accuse Melissa of cheating.  If Bryan doesn’t have proof – I don’t see how this will stick.  I just don’t.  And besides that – according to our poll, people just don’t care that much.

All photos courtesy of MyLifetime.com

The two-team concept (Keeping it Real and Dream Team) changed to 2-member teams last week.  Daniel feels like he needs to redeem himself and Benjamin has gotten some of his confidence back.  Michelle feels like luck is not on her side.  She’s wondering what’s going to happen now that her teammate is gone.  As long as she doesn’t have to work with Patricia, she’ll be OK.

Heidi shows up with the dreaded button bag.  She informs Michelle she will be joining the team of whoever’s name she draws from the bag.  Guess who Heidi picks?  If you guessed Patricia, you would be correct.  Michelle will be joining Patricia and Layana’s team.

The designers meet Tim at a dance hall where senior ladies are taking a class.  Some of the designers join in.  The challenge will be to design a fashionable and stunning look for each of these mature ladies.  They will be the clients and the models.  There is no need for the teams to have a cohesive look and the teams will decide which designer will be paired up with which client.  They all get together and consult with their clients.

After everyone returns from Mood, Amanda realizes her initial plan isn’t going to work.  Her fabric doesn’t match her plan for a structured design.  She is already freaked out and spinning into a dark place.  Daniel keeps asking his partner Samantha questions and she’s getting a little irritated with him.  Benjamin is trying to encourage Amanda and checks in with her constantly.

Michelle, Layana and Patricia aren’t really working together as a team.  Patricia seems to like to work alone and doesn’t confer with her team members about what she’s doing.  Tim arrives to check on the designers.

Tim tells Richard not to let his look overwhelm his client.  Stanley tells Tim not to worry about his time management; he’s got it under control.  Tim check in next with Kate and Tu.  He’s concerned about Kate’s Winter top with her Spring skirt.  He thinks she’s cutting her client in half.  As for Tu, Tim thinks his look has incredibly ambitious tailoring.  Michelle doesn’t think Tu can sew and his design is a mess.

Tim tells Daniel to make sure his look is special enough for the judges, and advises Samantha to break her leopard look up, which she tells him she had planned on doing all along.

Next he checks with the threesome (the ladies giggle at this when Tim says it).  Tim tells Michelle he was worried when he saw her top, but once she added her skirt to it, it transformed into something better.  He likes Layana’s design, but tells Patricia she is making a poncho extravaganza.  Patricia says her finished look will be great.  Tim tells Patricia that the more voluminous the design, the bigger the model looks.  Michelle can’t understand why the judges haven’t noticed that Patricia’s designs are crap and that her teammates have been carrying her.  Layana is also worried about Patricia’s look putting their team in the bottom.

Tim tells Benjamin to make sure his proportion and fit are very accurate or it’s not going to be good.  Amanda tells Tim her design feels vintage housecoat to her.  Tim agrees.  They talk about how she can improve upon it.  Amanda is just hoping she can make it through.  Daniel thinks Benjamin and Amanda’s designs both look matronly.  Benjamin is worried about Amanda at this point.

The lovely ladies show up for their fittings.  Amanda’s client thinks her look is wild and I can’t tell if she likes it or not.  Patricia’s model doesn’t look happy either and Patricia hates the look.  She thinks it looks like a horizontal bib and it’s not Patricia.  Tu’s is not close to ready and knows it’s going to take a while finish it.  Kate knows her piece needs to be perfect if Tu runs into last minute problems.  Time is running out and Amanda is still terrified because she has to make some drastic changes and do it fast.

On runway day, Amanda is still in panic mode and Patricia is redoing her whole look.  Stanley thinks he and Richard will knock it out of the park and the other teams’ designs are looking a little sloppy.  The clients seem to be enjoying all the pampering they are getting in hair and makeup.

Tu’s dress looks really baggy on his client and Kate comes to the rescue to try to put in some tucks and an added belt makes it look a little better.  Layana is still worried about Patricia’s design even though it, too, looks better.  Benjamin’s dress ends up a little too snug on his client, but he doesn’t have time to do anything about it.  It’s runway time and Amanda is mortified and embarrassed about sending her design down the runway. 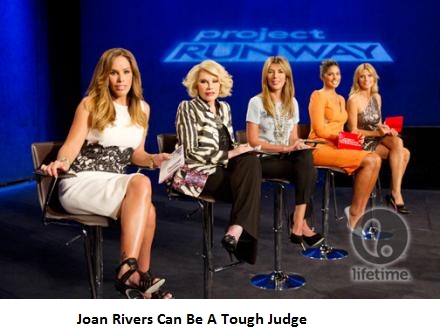 Here we go.  Michelle’s dress is a silk green and coral print. Nice.  Layana’s look is pretty also.  I don’t like Patricia’s look. It’s way too much material for that poor lady to carry around.  I love Stanley’s look on his client.  It’s a fitted pants and jacket.  Richard’s client looks OK in her turquois and black dress, but it’s not the best out there.  Tu’s dark green dress looks a little sloppy.  Kate’s model looks cute in her black top and printed skirt, but to me it looks a little juvenile.  Samantha’s leopard dress is sexy and it would take someone like her model to carry it off.  Daniel also made a black fitted sexy suit that I think looks great on his client.  Amanda’s printed dress is a hot ugly mess. Benjamin’s dress is OK, but I don’t like the fabric or the fit.  These two will definitely be on the bottom.

Michelle and Layana got high scores from Heidi, but Patricia got low scores and it kept their team from being in the top.  They are safe, but Heidi reminds them how important teamwork is.  As they leave the runway, Patricia apologizes to her teammates.  Hopefully this has humbled Patricia a little. 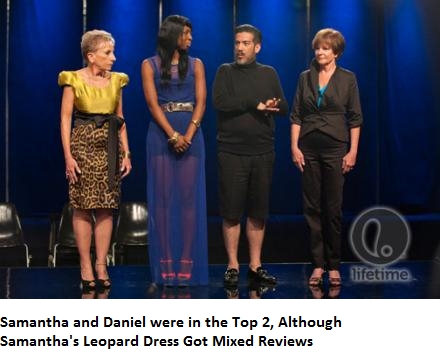 Richard, Stanley, Samantha and Daniel are the top two teams.  That leaves Kate, Tu, Benjamin and Amanda on bottom.  The bottom teams leave the runway.

Daniel explains his look first.  Heidi tells him he’s smart to do what his client wanted.  Nina is glad Daniel is back.  Melissa says it could use a little more pop, but he did a good job.  Joan thinks Samantha’s model looks like a menopausal kitten.  Heidi doesn’t like Samantha’s dress and Nina doesn’t think the puffy sleeves match her raciness.

Heidi likes what Stanley did, but thinks the pants could be longer and the crotch area is not perfect.  Joan thinks it looks very age appropriate and says Bingo.  Joan thinks Richard’s model looks easy, chic and likes that it shows her legs.  Heidi would like to have that dress.  Nina thinks it ends up drowning his model a little.  She thinks Richard could have pushed himself a little more.

The two low scoring teams come out.  Amanda tries to explain her design.  Rachel thinks the print is OK, but the whole dress is a mistake.  Joan says it’s just wrong.  Heidi says the back looks like she sat on glue and it stuck together.  Nina thinks it’s too girly and not dignified.  Heidi doesn’t like Benjamin’s dress.  It’s too tight for his model.  Rachel likes the color but the construction is wrong.  Joan thinks she looks heavy in the dress.

Tu admits his sewing was bad and his model was a bit let down.  Nina likes the color but there is an over-abundance of fabric.  Joan thinks it’s an old lady dress and tells Tu he doesn’t have a clue.  Nina loves the fabric of Kate’s dress.  Joan thinks it’s wonderful and Heidi says she didn’t give Kate a bad score.  Kate would not be in the bottom if it weren’t for Tu.  Kate takes up for Tu because he respects her whereas her former teammates did not.

The judges have some disagreements about Samantha’s and Richard’s designs.  Heidi and Joan like Richard’s, but Nina does not.  Joan likes Samantha’s, but nobody else does.  I think the winner may be either Daniel or Stanley with their pantsuits because they are harder to make than a dress. 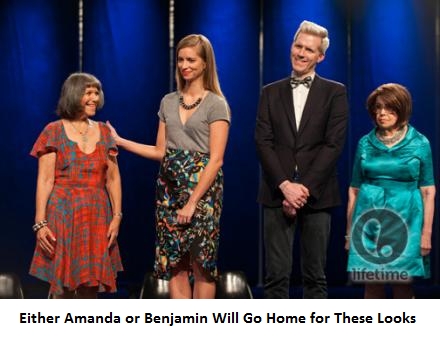 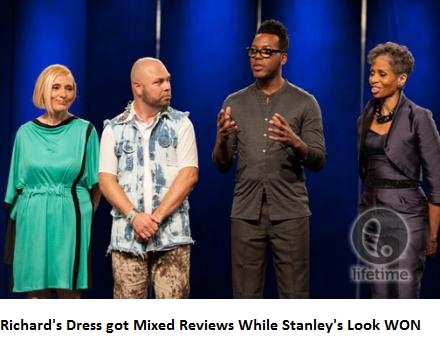 Either Amanda or Benjamin will be going home.  Nina and Rachel think Amanda needs to go, but Heidi thinks maybe it should be Benjamin.  They all agree Tu’s look is not quite as bad as either Amanda’s or Benjamin’s. 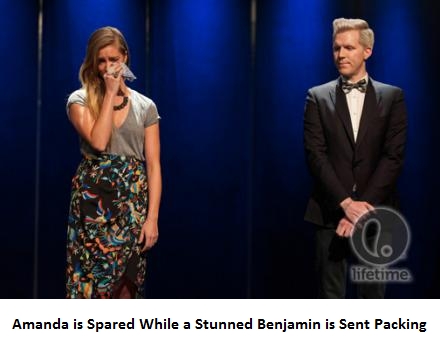 Benjamin is out.  Amanda starts crying right there on the runway and Benjamin looks stunned.  I think all the designers are kind of surprised.  He tells the others he is shocked and he feels like maybe the right thing didn’t happen but he has to accept it.  Even Tim says wow.  Amanda dodged a bullet this time.

Just a housewife ... who loves this place .... and loves to write ... You can reach me through this email: nomoredrama8@gmail.com. Lynn's Place is in tribute to Housewives blogger Lynn Hudson, who passed away in August of 2012.
View all posts by Veena (NMD) →
This entry was posted in Project Runway and tagged johnny the greek, melissa gorga cheating, melissa gorgas ex bulldog, project runway. Bookmark the permalink.