Celebrating Joanna’s birthday and checking out things for her wedding?  Photo credits: Twitter feeds @dianamadison for the first photo – lisa hochstein for the second. 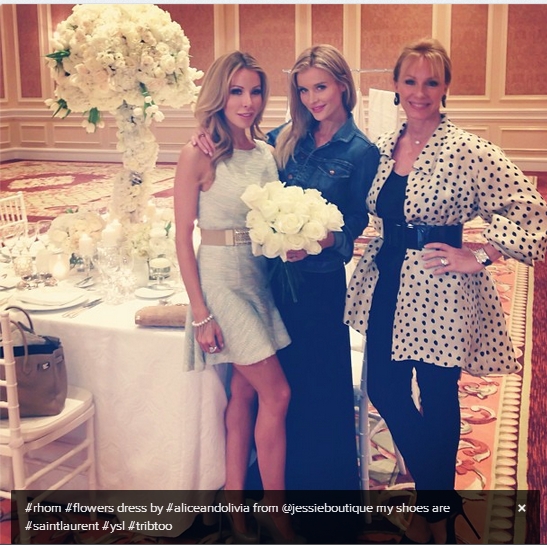 Three designers will be showing at Lincoln Center: Michelle, Patricia and Stanley.  Michelle “the rebel” is peaking at the right time, so she’s definitely a contender.  Stanley has consistently won during the season, so he deserves to be there, even though his three-look show last week was uninspiring and put him in the bottom for the first time.  He needs to kick it up a notch to win the whole thing.  Patricia is the wild card with her Native-American inspired designs.  She needs to make sure her line is cohesive and doesn’t look like a huge arts and crafts project.

The three designers still have their assistants; Amanda with Michelle; Richard with Stanley; and Layana with Patricia.  Tim comes to the work room with a surprise.  They will be getting another $500 and a last trip to Mood.

Stanley is not making anything new, but he wants to redo five of his dresses.  Michelle has one outfit she calls a “sore thumb” so she’s going to do a new look to add more color.  Patricia wants to change four of her looks to make her line more cohesive.  Layana is a little worried about how ambitious Patricia is being with only a short amount of time left.

Each designer meets with the make-up consultant trying to keep the judges’ past comments in mind.  With two days to go until final runway, Stanley is confident he knows what the judges want.  Patricia has a whole lotta work left to do.  Michelle is trying to tone down her accessories, but it’s difficult for her.

Tim arrives to check on their progress.  He loves Michelle’s new look, but doesn’t like her bleeding hearts sweater because it doesn’t go with her collection.  Overall, Tim thinks Michelle’s collection is extremely innovative and sexy.

When Tim gets to Stanley, he doesn’t see what Stanley sees.  He tells Stanley it looks like he got two of his pieces at a vintage shop and he needs to push back at the vintage aspect.  Stanley kind of takes the vintage remark as a compliment.

Patricia tells Tim her collection is going to be more cohesive, but not totally cohesive.  He tells her she cannot send black leather pants with two holes in them down the runway at fashion week.  Patricia is so disorganized she can’t find two of her scarves or some fabric she purchased.  Tim tells Patricia to repeat a textile on one of her looks to get a more cohesive look.  At that point, he’s not a happy camper about Patricia’s collection.  He’s exhausted after talking to Patricia.

Tim leaves the designers to their work.  The models show up sporadically for their fittings.  Stanley takes the most time with his models because he’s actually constructing his designs while they’re on the models.  Patricia is trying to figure out how she can use her great leather pants with the holes in them, because they look good other than the holes.

On the last day before the runway, all three designers have their problems.  Patricia and Stanley have work left to do and Michelle has zipper problems with one of her looks.  Tim comes in and tells the assistants they have to leave.  Michelle gets emotional when Amanda leaves.  Right after that, the families of the designers arrive.  Patricia’s children show up.  Michelle’s brother and husband are there for her, and Stanley’s partner and mom show up for support.  Stanley wishes his mom could stay and help him sew.  The families only get to stay a short time and then they have to leave.  Tim comes and tells the designers they have until 5 PM to finish up.  They can take their sewing kits to the runway with them the next day and will have people there to help them backstage.

Tim tells them Michael Kors will be a judge the next day and that he’s powerful with the other judges.  He gets a little teary-eyed as he leaves the work room.  Patricia figures out how to fix her holey leather pants problem.  She’s going to make more holes.  Michelle whispers to Patricia that Stanley is in bad shape because he doesn’t have any of his stuff together.  Michelle steps in to help.  He still has four dresses and a top that need to be completed and he is feeling sick.  Michelle is seriously worried about Stanley because, at the end of the day, he doesn’t have one look ready to be put on a model.

It’s runway day!  Michelle and Patricia are excited and giddy.  Stanley is freaking out and getting really, really nervous.  Michelle offers to give four of her six backstage sewers to Stanley.  The three of them arrive at Lincoln Center early that morning.  I always like to see how awestruck the designers are when they enter the venue.

Once they get backstage, it’s chaotic for all three to get the finishing touches on their designs.  Michelle pretty much only needs steaming and pressing on her clothes.  Not so for Patricia and Stanley who still have some sewing to do.  Michelle helped Stanley pack up to go to Lincoln Center so she knows he has mountains of work left.  30 minutes before the show, Stanley is still making a dress.  The judges take the runway and I see celebrities and former Project Runway contestants sitting in the audience.

Tim is flabbergasted and has never, in all his previous seasons of Project Runway, seen anything like what’s going on in Stanley’s corner with four people still sewing his dresses.

Heidi comes to the stage and introduces the judges; Zac, Nina and Michael.  Michelle’s show is first.  She comes out and recognizes her husband, brother and parents.  Her collection is cohesive with a mixture of textures like quilted fabric, leather, and jersey type knits.  While she’s talking with Tim backstage, she calls it pretty and fierce at the same time.  Tim tells her he’s totally captivated.  Michael Kors is making lots of notes.  She includes her bleeding hearts sweater.  I like her last look, which is a long russet colored gown with gold grommets on the sides.  Michelle is going to be a hard act to follow.

While Stanley is still sewing backstage, Patricia comes to the stage and greets the audience in her native language.  She dedicates her line to trees.  Patricia’s first look reminds me of a pink nightgown I once owned.  All of her looks are pure Patricia and she stayed true to herself.  I like her holey pants outfit.  From looking at the judges, I think Zac likes Patricia’s collection.  Heidi looks like she may be disappointed to see that Patricia didn’t really change the dress from her three-look collection the judges weren’t crazy about.  I don’t like Patricia’s collection as a whole, but I have to give her props for imagination and creativity. 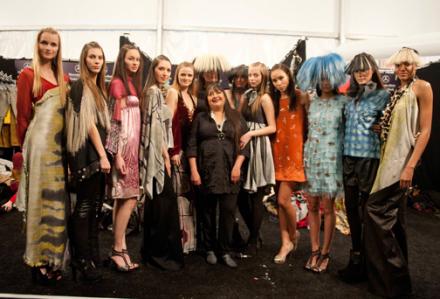 Here comes Stanley and let’s hope his outfits don’t fall apart on the runway!  His collection went for the sleek and sophisticated look.  He used a lot of silk and satiny fabrics and definitely made improvements to his three-look dresses.  I’m not sure if Stanley did enough to win it. 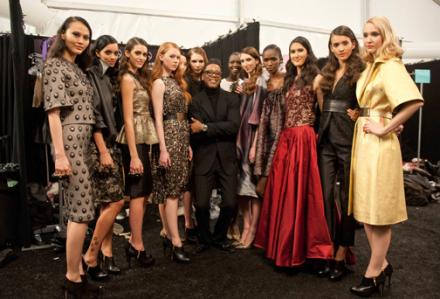 If I were to pick a winner, it would be Michelle.  Will the judges agree?  Michael is there with an objective view because he knows nothing about the designers.  Heidi brings all three designers to the mini-runway and each judge tells them how proud they are of them.  Then the last-look models come to the runway.

Michelle explains her female wolf inspired collection.  Nina calls her opening look phenomenal and liked that she offered a lot of interchangeable pieces.  Nina was most crazy about the bleeding heart sweater.  Michael loved, loved, loved her opening look but didn’t love her felt gown at the end.  He told her to not feel like she had to have a gown for the end of the show.  Heidi liked the cohesiveness, but didn’t like some of her silhouettes.  Michael also thought her chiffon ties were costumey, but Zac disagreed slightly.  He thinks her work is amazing.

Patricia explains her “tree” collection and she made all of her textiles, dye, embellishments, etc.  Michael loved her suede shirt and shorts.  At the beginning he thought it might be the art teacher on an acid trip.  Heidi noticed the crowd light up at Patricia’s show and tells Patricia she’s been a fan of hers from the beginning.  Zac loves her techno pow wow last look; however, he thinks some of her textiles feel older and not fresh.  Nina tells Patricia she also loves her last look dress and she’s very talented; however some of her pieces were very disconnected.  Nina still thinks Patricia needs to clean it up.

Heidi asks Stanley who his woman is because she really can’t tell.  Michael loved the gold coat dress, the strapless bubble dress and the little white dress.  He calls his last look Betty White from Dancing With the Stars. Ouch. I’m guessing the fact that Stanley got other people to do his embroidery work will not be in his favor.  Heidi noticed some of his designs looked last minute coming to the runway.  All of the judges agree his last gown looks old lady.  Nina says some of Stanley’s pieces are really special, but she may have paired some of his separates differently.

Each designer states why they should win Project Runway and then leave the runway so the decision can be made.  The judges don’t think Stanley’s collection was exciting enough.  Nina doesn’t think Stanley listened when they told him to make his clothes more modern.  Michael doesn’t think Stanley had anything to say and Heidi thinks he worked better in a team situation rather than on his own.

The judges think Patricia is doing things new and different and can’t get over how she pays such attention to artistic detail.  Nina is conspicuously silent while the other three are singing Patricia’s praises.

Michael loved the quilting of Michelle’s clothes and they all loved the bleeding heart sweater.  Heidi thinks Michelle over-designed, and doesn’t agree with the others on one of her layered looks.

Nina thinks the judges are being too swayed by Patricia’s artistic techniques, and she thinks Michelle is “of the moment.”  Nina doesn’t know who Patricia’s customer is, but Heidi thinks it may be time to give someone who’s “out there” like her a chance.  Zac and Heidi are leaning towards Patricia and Nina is leaning towards Michelle.  Not sure who Michael prefers, but the winner is going to be a woman.  Will Nina get her way this time?

When the three designers come out, Stanley is immediately eliminated for his non-modern collection.  It’s down to the ladies.  Heidi tells Michelle the judges were in love with most of her pieces and tells Patricia her collection was one of a kind and she marched to the beat of her own drummer.  Heidi says the name “Patricia” and I’m thinking she’s going to be named the winner, but she’s not.  She’s out.

Heidi comes to the stage to congratulate Michelle on winning Project Runway Season 11. I agree with the judges’ decision.

I’m glad NMD talked a reluctant me into blogging Project Runway this season.  When I saw it was teams, I wasn’t very excited about it, but I truly enjoyed the concept.

Just a housewife ... who loves this place .... and loves to write ... You can reach me through this email: nomoredrama8@gmail.com. Lynn's Place is in tribute to Housewives blogger Lynn Hudson, who passed away in August of 2012.
View all posts by Veena (NMD) →
This entry was posted in Project Runway and tagged joanna krupa married, joanna krupa wedding. Bookmark the permalink.