Joey Gorga and the Black Tar – another New Jersey Mystery

Joey Gorga and the Black Tar – Another NJ Mystery by NMD

Joey Gorga is a pompous peacock.  He likes to primp and preen in front of the camera – almost as much as his wife.  He is rarely seen without a baseball or knit cap.  About a month ago on instagram he tweeted a photo of himself with a buzzed head.   He exhibits all the signs of a man losing his hair.  So what.  That’s a natural thing.  But does he use black hair die – the cheap stuff – to cover it up??

Backing up a little.  Sunday’s episode has already aired a first look that covers most of the fight between the two Joes.  As fights go it was mild.  Joe Guidice came into the room demanding an apology from his brother-in-law for calling Teresa scum.  Seconds before Joe was explaining to Rosie that he promised his father-in-law that he wouldn’t beat up Joey.  You see – these two men have been itching for a fight all season.  They can not stand each other.  It’s clear that Joe Guidice is much closer to Joey’s dad than he is.  That makes me believe that Joey has a flawed character if his own father has trouble liking him.  It’s not all about Joey’ wife.

As Joe Guidice storms in, Joey Gorga lowers himself like a little animal and charges his brother-in-law.  The lowering himself is important, because apparently he fights dirty and was trying to bite Joe Guidice’s balls.  Oh vey.  Who does that?  I suppose he was trying to protect his pretty face.  Unfortunately his hat got knock off.  I don’t think many punches were landed, but Melissa Gorga did manage to scratch Joe Guidice.  Many people tried to pull the two Joes apart.  Teresa ran for help, yelling “call the cops.”  Melissa Gorga was hurt, astonished, devastated that Teresa didn’t roll up her sleeves and break up the fight.  Melissa didn’t seem to appreciate that it was her husband that charged Joe Guidice and tried to BITE his balls.

All those fun and games aside, the real mystery was the “black tar” that was all over everyone after the fight.  Teresa says “maybe it’s her make-up.”  Melissa calls it black tar.  Joe Giudice tries to wash  the stuff off his hands.  But if you look carefully at the video, when Joey’s cap falls off in the fight.  Melissa grabs it and sprints over to him and slaps it back on his head the second she notices.  Sprints.  Like she was in the Olympics.  And the back of the cap is smudged, like something black – say cheap hair dye – is smearing the inside.

Boston has created a few photos for our amusement.  Could Joey Gorga really have used cheap spray on hair dye out of a can?  I wouldn’t put  anything past the little ball biter.

(full disclaimer – I am NOT a supporter of Joe Guidice. The DUI, the way he treats his wife, the alleged illegal activity with his business partners, the ignorance in how he uses words that hurt people – none of that is excused in my mind just because Joey Gorga is a pompous peacock.  However I do think he was trying his best at the retreat and it was the Gorgas that came in looking to fight.) 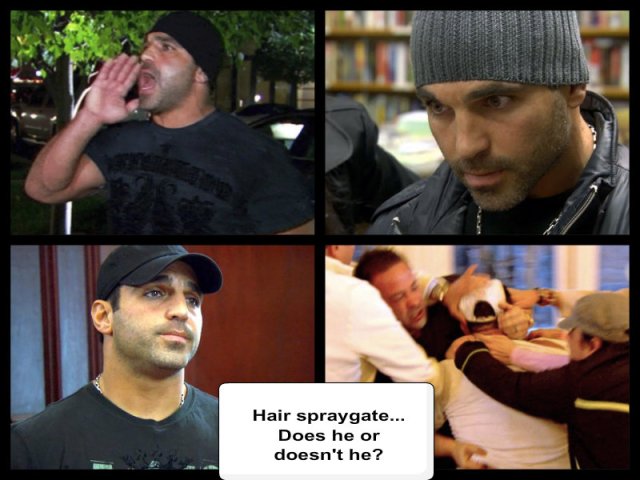 Just a housewife ... who loves this place .... and loves to write ... You can reach me through this email: nomoredrama8@gmail.com. Lynn's Place is in tribute to Housewives blogger Lynn Hudson, who passed away in August of 2012.
View all posts by Veena (NMD) →
This entry was posted in Uncategorized and tagged Joe Gorga hair, joe gorga hair dye, real housewives of new jersey black tar. Bookmark the permalink.