The Real Housewives of New Jersey Reunions are about the worst of the franchise.  Name calling, violence, just gut wrenching behavior, and let’s not forget about their outfits.

Jacqueline was about to go into labor so they filmed the Season One reunion in a NJ warehouse.  During Season One, Jacqueline stood up for Danielle against Dina, but by the time the reunion was filmed she can’t stand Danielle.  I’m pretty sure this was the time when Caroline called Danielle an animal, after accusing her of doing “something” to Dina.  That something was later revealed to be letting Dina’s ex husband know that he needed to sign a release to let Lexi (their daughter) be on the show.  He didn’t sign and Dina had to film on her own Season Two – often with her hairless cat.  Teresa was pregnant with Adriana.  I think I prefer her hair curly.  I have no words for Caroline.  Okay -what was she thinking?

And then there were four – the lowest number of housewives in ANY franchise history.  This was the season that Dina quit half-way through.  Lynn reported that her source (which I assume was Jacqueline) told her that Dina was fired for being boring – AKA filming with that hairless cat.  We now know that Jacqueline is not know for telling the truth – and was probably covering for her own feud with Dina.  It’s an open secret that Jacqueline is believed to have been the one that gave Lynn the paperwork on Project Ladybug – Dina’s charity.

For those of you that like Dina Manzo now – back in 2010 in the “old days” of the blogs – both Real City Housewife and Lynn wrote many a blog about cray cray Dina.  Here’s a classic from RCH.  She was as famous as Jaq is today for her twitter meltdowns.  Here’s a blog Lynn wrote about Project Ladybug.  Ahhhh- good times.  Of course, all of this was eclipsed during that reunion because Teresa tossed Andy Cohen aside like a rag doll when Danielle mentioned those infamous words – “do you acknowledge your nephew.” The “don’t mention my family” cry was heard around the world.  This led to all sorts of rumors that Joe had a love child with a mistress – when in reality it turned out to be little Joey – Melissa third child.  Now – IF we’re to believe the rumors that circulated this season – there could be some question as to that child’s paternity. However it’s more likely that Melissa just felt that Teresa should mention the birth of her nephew on the show – since it’s all about Melissa.  PS – This has to go down as the worst dressed reunion of the bunch!  Danielle looks like she went to Old Navy for her outfit, and Teresa’s bubbies are busting out of her dress.  At least Caroline stepped it up to wear a typical housewives one-shouldered number – something we’ll see again the next season.

This brings us to Season 3 Reunion.  This was the one the day AFTER the Posche fashion show.  Jacqueline had a complete meltdown and refused to go.  If they hadn’t already filmed Season 4 – she probably would have been fired.  But time has a way of healing all wounds, and she was kept on for another season.  Teresa spent the entire reunion defending herself against Caroline’s wrath.

Season Four was a repeat of Season 3, except that Jacqueline had recovered enough to take a seat on the couch and treat us to a little cray cray.  This was probably the most toxic reunion of the bunch – with Caroline, Kathy, Melissa, Teresa, and Jacqueline all sinking to new lows as they insulted each other’s families, looks, and anything else that could cut to the bone.  They really needed NeNe Leakes as the moderator to tell them to knock it off.  Let’s not forget Rosie roaring in the background.  At least Rosie got the coveted spot on the couch when she had her turn.  Good times, good times.  This was also Star99’s first Housewives blog for Lynnfam – as BB couldn’t take it any more.  Sound familiar??  Melissa was proud of her glittery eye shadow – and Caroline called Teresa’s dress a Christmas Tree dress I think.  Kathy and Caroline wore satiny dresses again – staying in their comfort zone.

If the rumors are correct, this could be the last we’ll see of Jacqueline Laurita.  I’ve heard that before.  A couple of years ago she gave Lynn the scoop that she was quitting housewives.  Now what’s a blogger to do if she doesn’t realize her source is cray cray?  It’s quite the dilemma.

It looks like Teresa and Melissa get the top spots on the couch.  Rosie and Joey push Kathy right into that end spot when they show up, and Rosie and Joe share a canoodle.  Dr. V shows up, and Andy remembered to wear socks.  It looks like Caroline and Jacqueline went shopping together and bought versions of the same sort of dress.  Half the photos of Caroline show her shoulders bare – the other half they are covered.  Both Melissa and Kathy are wearing long dresses – like Teresa did last year.  Teresa shakes it up a little with a glittery number. 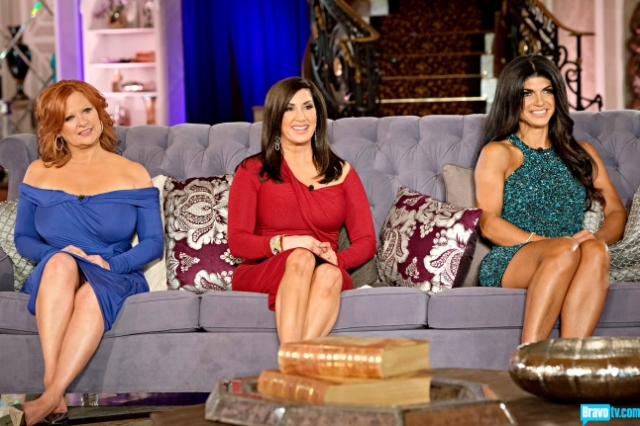 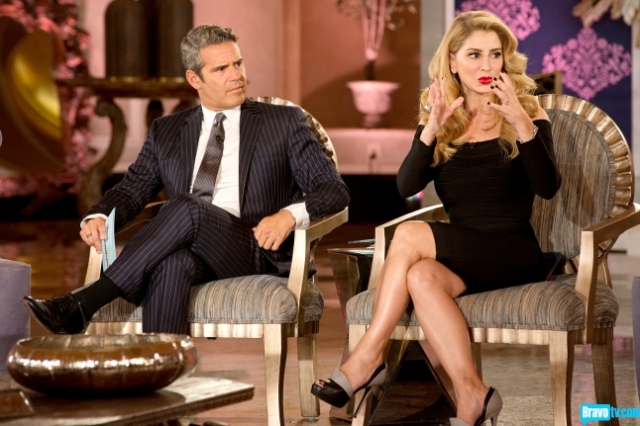 We have a whole lotta shows starting up in the fall.  If anyone is interested in blogging any of the shows on the list – or any I may have forgotten, please let me know.  We’ve bot Beverly Hills (show and blog) covered by BB and Stars99 and RamonaCoaster will be doing the ATL blogs.  The Empress will be covering Walking Dead on her blog.  We’re looking for bloggers for the following:

Just a housewife ... who loves this place .... and loves to write ... You can reach me through this email: nomoredrama8@gmail.com. Lynn's Place is in tribute to Housewives blogger Lynn Hudson, who passed away in August of 2012.
View all posts by Veena (NMD) →
This entry was posted in Let's Chat, New Jersey, Real Housewives of New Jersey and tagged jacqueline laurita dina manzo, jacqueline laurita leaving housewives, Jacqueline laurita lynn hudson. Bookmark the permalink.