Real Housewives of Atlanta by NMD

I don’t know if the Bravo execs are playing a game with the Beverly Hills ladies, but if so – my hats off to them.  While the next episode of Beverly Hills promises nasty behavior, Atlanta gave us ladies bonding, home cooking, and a little dose of fun.  I hope the ratings watchers are paying attention.  Beverly Hills has devolved into some sort of Mob Wives knockoff that you can find on any other station with faux-shocking behavior  that is no longer shocking.  It complements Vanderpump Rules – which is trying to be the next Jersey Shore.  Atlanta seems to be filling a niche that can’t be found on other channels, and is bringing in more viewers each week.   We’ll see if that holds when they get into the cat fights, but for now – it is entertaining.

We pick up the morning after the dinner party in Savannah.  NeNe has a hangover, so the plan is to stay in the house and chill.  The ladies will all cook for each other.  As they make breakfast, the topic turns to phone/skype sex.  Apparently Kandi was on the phone to Todd the night before.  Porsha reveals that she doesn’t think men want to see vayjayjays – and she also reveals that she has a tattoo that she immediately calls a piercing.  It’s Porsha, so I don’t know if she used the wrong word the first time or has both – either way, it surprises me.

Cynthia turns the conversation to Noelle (her 14 year old daughter) and her young boyfriend.  She explains that she talks about everything to Noelle.  NeNe takes over the conversation and starts talking about her childraising techniques.  She basically says that young girls are hos and twerk in the mall.  Kandi points out that she and Cynthia have daughters, and they worry about them getting pregnant, while the other ladies have sons.  NeNe really gets into it – with her loud and talking over everyone behavior.  NeNe has been defending her behavior all week on twitter.  I wish she’d get over herself.  For some reason, Cynthia can’t take it any more and starts to cry.  I think it’s because she loves her daughter so much and truly believes that through honesty she’ll steer Noelle through those teenage years without incident. But she’s worried she’s making a mistake and NeNe has hit on her insecurities.  Personally, I don’t think NeNe is one to be dishing out advice since her oldest son never listened to her.  Sigh.

Cynthia takes off, and Kenya and Porsha go to comfort her.  Meanwhile, NeNe defends herself.  She asks Kandi if she was wrong.  Kandi says that NeNe shouldn’t lie, but at the same time ….  NeNe says (defiantly) that she’s the type of friend that will tell it how it is.  She is really defensive.  She makes fun of Cynthia – and says that if Cynthia didn’t want to hear her opinion she shouldn’t talk about it.  Except that this is Cynthia’s storyline, so of course she wants to bring it up.  C’mon NeNe – you’ve been around long enough to know that.

Cynthia, Kenya, and Phaedra have a really sweet heart to heart.  It’s sort of funny because neither of the comforters have kids, but it sure is nice to see them build each other up.  I thought they hated each other.  The bottom line is Cynthia is feeling a lot of pressure to be a good mom and keep Noelle on a good path.

As Cynthia goes off to repair her makeup, Porsha and Kenya head off to continue talking.  They realize they have one thing in common, they both want to be a mother.  Kenya talks about how hurt she is that her mother abandoned her.  Porsha points out that even though they are spending time together, they really have no idea what each of them is dealing with in their real lives.  Have they ever even talked seriously before?  They end up hugging.

NeNe hunts down Cynthia and cracks a few jokes.  Cynthia tries to explain how she feels, but NeNe wants to keep it light.  NeNe extracts herself from the situation, and stumbles on Porsha crying.  She’s a little annoyed because she just wants to have fun.  I guess she didn’t get the memo about bonding.  She sucks it up and heads into Porsha’s room to give her a hug and pep talk.  In her talking head, she is clearly over Porsha and explains that their relationship is one sided.

NeNe has had enough of the crying, and decides that they’ll all go out to a Drag Queen show that evening.  Because everyone is getting along so well, NeNe forces Kenya to talk to Phaedra about their differences over the sexting.  Kenya manages to escape without committing to this talk because her assistant arrives with her dog Velvet, who isn’t feeling well.  Nothing makes more sense than bringing a dog with diarrhea to someone else’s house.

Kenya somehow ends up in Phaedra’s room trying to talk to her – despite her protestations that she didn’t want to.   Phaedra didn’t receive the make-up-scene memo, and doesn’t want anything to do with it.  She distracts herself studying paint dry and then then starts pumping her breast to drown out Kenya.  Heh.  Kenya tries a little more, but Phaedra just says a bunch of cliches – life is short, it’s all good, etc. and refuses to talk about anything serious.

Finally they are at the Drag Queen show.  They have fists full of bills – but it’s not a strip club.  It’s more like a comedy club and NeNe asks the drag queen to teach Mynique to read.  Nothing much happens – it’s a short scene.

Dinner time.  Everyone is sober and happy to eat the southern food they cooked all day.  (What time did they go to this Drag Show and why are they back in the exact same clothes they were wearing before they went out.)  Porsha is a woman in her 30s who is acting 15, and sends a text to Kordell saying she wants to talk.  He responds back – “about what?”  Kandi texts back “us” and Porsha starts squealing as if it was the first boy she’s ever sent a text to. 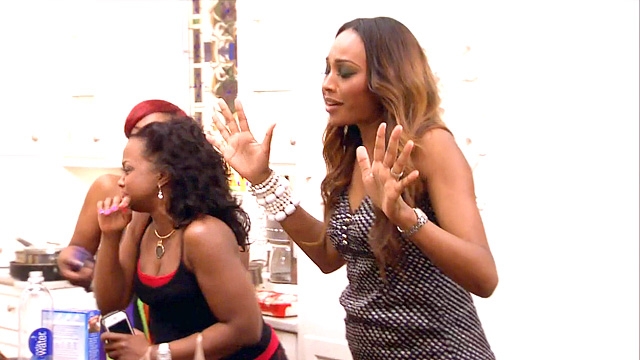 Uh-oh.  I hope Carlton isn’t watching this.  A giant flying cockroach interrupts their dinner, and they all go off squealing and screaming. Kenya and Porsha take care of it, and then they pretend to toss it down Cynthia’s dress and again with the squealing and screaming.  This is like a slumber party.  At least they are screaming in fun and not at each other.

So all is well that ends well.  Except in the last few minutes of the episode NeNe decides to give Porsha a lecture on what it takes to be her friend.  Apparently Porsha has been too busy dealing with her divorce to take care of NeNe.  Oh – and Kenya has seen NeNe’s Hello Kitty and it’s as bald as her head.  Nice visual to end the blog.  Thanks, Kenya and Bravo.

Just a housewife ... who loves this place .... and loves to write ... You can reach me through this email: nomoredrama8@gmail.com. Lynn's Place is in tribute to Housewives blogger Lynn Hudson, who passed away in August of 2012.
View all posts by Veena (NMD) →
This entry was posted in Real Housewives of Atlanta. Bookmark the permalink.