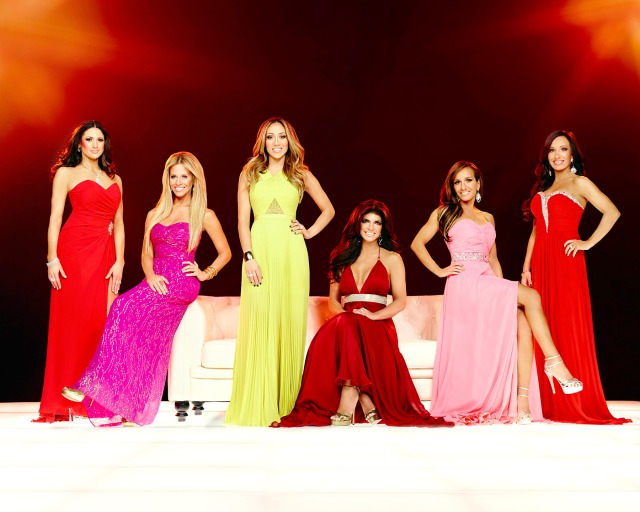 The Jersey ladies are back for a 6th season on Sunday, July 13 at 8/7c!  Season 5 ended in October 2013, but it feels like the ladies have been gone for longer than 9 months.  Teresa Giudice is the only original cast member & Melissa Gorga, who joined the cast in Season 3, is the only other returning member.  Caroline Manzo & Jacqueline Laurita have said goodbye.  Kathy Wakile has only a recurring status this season.  Dina Manzo is making a return after a 3 season hiatus.  She was one of the original cast members, but left the show abruptly during the 2nd season after drama with Danielle Staub.  Can I just say how glad I was to see Danielle go?  Dina’s Bravo bio says that she took advantage of her time away from Bravo to “focus on Alexia, to grow Project Ladybug, and to enjoy two seasons of her own show on HGTV called Dina’s Party.”  New to the cast are: Amber Marchese, Nicole Napolitano, & Teresa Aprea.  Let’s meet the new ladies:

Amber Marchese is a mother, actress, & entrepreneur.  She has a husband & 4 children.  “Amber graduated with a BA, then acquired a Masters in Bio-Behavioral Studies/Exercise Physiology from Columbia University. She has a passion for health and fitness and has created her own fitness brand called Vici fitness.”  She underwent a double mastectomy & chemotherapy for breast cancer at age 31.  She now “donates time and money to countless charities raising awareness for young women with cancer and assisting them with the emotional and financial impact of the disease.”  Amber has taken acting classes & plans on “conquering the acting world.”  Based on the previews, most of the drama this season will involve Amber & her feud with the twins.

Nicole Napolitano is a private aviation specialist.  She is also “one of a set of spectacularly sexy, fashionable twins. Her and her twin sister, Teresa, are inseparable.”  She is divorced & has two teenage boys.  “Nicole is fashion-forward and ahead of every trend. Even in her down time, or heading to the gym, she dresses to impress.”  She “ran a family restaurant at 20-years-old, studied at St. John’s University, as well as at the American University of Rome.”  Nicole created a home business focused on personal development & won a Rising Star Award.  After her divorce, she “started a brand new career in private aviation and works for a premiere jet charter brokerage handling high-profile clients.”  I know, I can’t believe that’s a legit job either, but I have a friend who does the same thing.  It’s not nearly as glamorous as they make it sound – it’s really just being available 24/7 to cater to the travel whims of the wealthy.

Teresa Aprea is a mother & restaurant owner.  “Her twin sister, Nicole, is her best friend and together they exude positive energy, love, and are always ready for a party.”  Teresa first married her husband in 1991, divorced & remarried in 2010.  They have a teenage son.  She & her husband own two restaurants: “Angelo’s of Mulberry Street (a true landmark, family-owned for years, and even Presidents have dined there)” & Ponte Vecchio.  She loves travel & fashion.  “She loves planning amazing soirées and dinner parties with lots of friends and interesting people.”  This season, the infidelity rumors focus on Teresa, whose husband allegedly cheated.

Thanks to Hulu, I’ve been catching up on Season 5, which I admit I didn’t watch much of.  I was just too disgusted after watching Teresa blame everyone else for her problems & try to tear her brother’s family down.  Here’s where we left off & what’s happened since:  After numerous rumors about Melissa & a fight between the Joes, the Gorgas & the Giudices finally seemed to have mended their relationship.  Joe Giudice was in trouble for allegedly using his brother’s information to secure a new driver’s license, though he didn’t seem too concerned about it.  In July 2013, the Giudices were indicted on federal bankruptcy & bank fraud charges.  They both faced jail time if convicted.  The two pled guilty in March, but have not been sentenced.  After Joe’s father suddenly passed away in June, their sentencing date was moved to September 23.  Filming for Season 6 began in December 2013 & concluded in April 2014, so it may cover the guilty pleas but won’t include the sentencing.  I hope that the whole season doesn’t focus on their legal drama.

Bravo has posted some previews & here’s what we’ve learned: They group travels to south Florida & Atlantic City.  Melissa & Joey still have a “hot” relationship – yuck!  Teresa & Kathy are still feuding.  Milania still speaks her mind & may be my favorite cast member!  Dina’s marriage is struggling & she files for divorce.  The Gorgas enter the garbage business.  Of course, Teresa & Joe’s legal troubles just keep getting worse.  We’ll see how they handle that & how it affects the children, especially Gia.  Amber & Melissa are old friends, but seem to have lost touch.  Amber struggles with the repercussions of her past cancer diagnosis.  The twins are bawdy & outspoken.  Dina & Amber have a feud.  There’s a rumor that Teresa A’s husband cheated on her.  The twins have a feud with Amber & Teresa A confronts Amber at a luncheon.  And again in Atlantic City.  There’s a possible fight at a fire-fighter themed party.  You know there’s plenty of drama when Teresa G looks like the calm one.

This entry was posted in Real Housewives of New Jersey. Bookmark the permalink.