Last week we watched Kim contemplating getting her figure back to where it was before this last litter.   This episode opens with Kim packing to go to Miami for her Mommy makeover. Plastic surgery that includes new breast implants and lift, tummy tuck and a hernia repair. And I’m assuming a vaginal rejuvination based on a comment she made and another that KJ made during this episode.  Yes, her young son KJ, but we’ll get to that a little later.

Kim is wearing pink pants that are reminiscent of sausage casing, while telling Sweetie how she might need to pack a wig to make her feel better about herself.  Kim says she’s staying in Miami 3 – 4 days and Kroy corrects her to say 5 or 6 days.  Kim can’t wait to come home to her babies.  She wants a lockdown on the house while they are gone. No one leaves, no one comes over. She wants her girls to help out the nanny and the girls don’t understand why.  Kim tells them they need to spend time with their brothers.

Kim whines so much about leaving her babies and how sick it makes her feel, wah wah wah and of course, she will leave them.  By choice, so stop your whining bitch!  She tells the girls that Kroy will be watching them on the security cameras while gone.  Kroy and Kim are driving to Miami because she will not be able to fly post surgery.  They arrive and get settled in their hotel room, which involves stocking a lot of food and drink. Kroy then takes her to Dr. Lenny Hochsteins’ office for the surgery.  Despite Kim’s nerves being shot, she looks beautiful in her natural hair and no makeup.  Shortly after they enter the building Kim has a bit of a breakdown and cries. Kroy talks her down gently and they continue on. 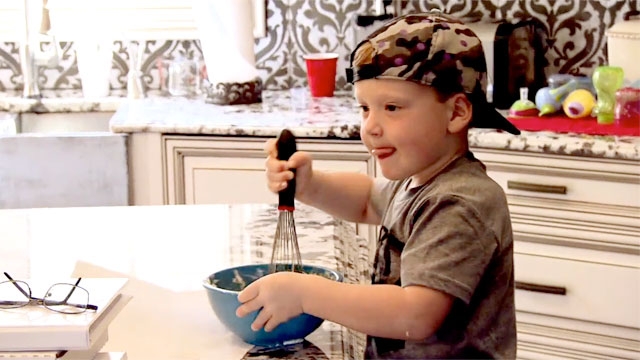 Back at home, the girls are in the kitchen with KJ and Kash. I’m not going to take the time to figure out the smart ass or inappropriate things that KJ just said to his sisters. He’s apparently heard that Miliana has a huge following and is determined to find his claim to fame.  He’s also getting rough with his sisters. Clearly taking advantage of the situation and playing to the cameras. It’s not cute no matter how cute of a kid he is.

The surgery is complete and Kroy is helping her out of a wheelchair to situate her in their hotel room.  I love the view in this scene.  Kroy must have a collection of white pants that rivals Yolanda.  Kim is hunched over, as required for the surgical work done to her abdomen. She’s in her Pink sweat shirt and sweat pants that are pulled up way high and over the sweatshirt, she looks like a very old woman and she wants to know why her pants are so high. Chuckles. I’m trying to figure how the hideous decoration of this hotel room is beneficial to recovery. It’s making me nauseous just looking at it on TV.  But not Kim. No, she’s drugged up and repeatedly asking for pizza, Snickers and Gatorade.  Pizza?!

Back at the house the man child KJ is being disrespectful to Ariana.  Kim calls the girls who are with KJ on Facetime (video phone).  She tells them she can’t see her titties yet and is anxious to see them.  KJ asks his mom if she likes her vagina. She acts surprised and partially disgusted. I’ll bet none of you are surprised based on what this boy is exposed to hearing at times.  Kroy tells KJ he’s coming home to spank his butt. The girls tell their Mom to hurry and come back. Brielle claims helping take care of the boys was enough birth control for the rest of her life and she’s never having kids!

Kroy packs up Kim in the Escalade for the drive back to Georgia. I can not imagine subjecting a post surgery and multiple surgeries body to all the vibration of such a long trip, but at least she’s fairly loaded on painkillers.  She asks Kroy if she thinks her boobs will turn out okay. He replies fuck yeah, they are going to be like porn star meets soccer mom and some more graphic descriptions.  These two have a special love, I tell ya.  They endure the 12 hour drive and arrive at the house in the early morning to sleepy eyed kids in PJ’s.  Kim is so happy to see them and wants to love and hug them all over but can’t and whines some more about it.  Kim knows KJ wasn’t good. Kroy reminds KJ they know things because of the cameras are always watching. Kim says that KJ is always good for Kroy, but not good when he’s gone.  It’s something they’re working on, especially with football season coming up.

I’d rate this episode as my all time least favorite DBT, based on subject matter, excessive descriptions and language, for which I spared you a great deal of that.  The only saving grace was Kroy in those white pants!  Tune in Sunday, September 21st for the season finale where Kim throws Kroy a going back to work party.

Brandi asks Lisa why she didn’t take her husband, Harry Hamlin’s name. Brandi asks if it’s ego and Lisa says no, she wanted to to take his name but he encouraged her not to. Brandi says that if Lisa took his last name people would make “ham” references if she got fat(nice, Brandi). Brandi would like her kids’ names to be hyphenated, Glanville-Cibrian because she did all the work to have them. What’s the best/worst thing about Harry? Best – he’s very smart. Brandi thinks that most the time, hot guys are dumb. Worst – he sshhhushes Lisa all the time. Lisa admits she’s “fucking loud” and it “fucking pisses her off” when he tries to quiet her.

Lisa says that DWTS was the hardest thing she’s ever done followed by the musical. She got the role in Chicago as a result of DWTS. Lisa says her fav dancer on DWTS is Derek. Brandi mentions Julianne Hough and how she used to have a lot of sex with Ryan Seacrest (that’s apparently Brandi-speak for “dating”). Lisa says that it was a good career “move” for Julianne and says she was kind of responsible for them hooking up. Lisa says Julianne was 19 and engaged before meeting Ryan and when Brandi says she’s surprised she was engaged so young Lisa says, “Mormon”.  Brandi says she’s known Ryan for a long time and that Julianne was a little “natural” compared to his other girlfriends.

Lisa’s just done two films. Lisa has two teenage daughters. Lisa is 50 and Brandi wants to know what she does to look so good. “I try not to eat”, laughs Lisa (joking? Hard to say). They talk The Lips and Brandi mentions Lisa had it reduced. Lisa says that unless you get cut, it’s not surgery and she hasn’t had a face lift. Brandi says she has a zit and says she named it “Kyle” (ruh roh! New season drama alert?).

Both Lisa and Brandi use Retin A. They talk about how dirty and polluted LA is and Lisa’s QVC line, which she’s had for 6 years. Brandi asks about Lisa’s experience on Celebrity Apprentice. Brandi says Lisa was the only normal one on the show. Lisa agrees and says that there were certifiably crazy people on the show with her except for Penn Gillette. In addition to the QVC line she also has dance videos.

Vivica A. Fox: Vivica was on CA with Brandi. Vivica has a wig collection. Vivica is obsessed with fashion and, according to Brandi, always looks perfect. Vivica asks about Brandi’s boys and they talk about her son’s medical problems in NY.  She says angioadema(?) and he can go into shock at anytime and that’s he’s never without an Epipen. These two seem friendly and Vivica gave Brandi a housewarming gift (on house #3? I’m losing track). Vivica has been in the showbiz since the late 80’s.

Vivica has a shoe fetish and resells them so she can get some cash back to buy more. Vivica only wears high fashion designer clothes. She just finished Sharknado 2 (did I hear that right?!). Then she’s doing a play. She started in soaps and thinks her big break was the movie Independence Day. Vivica has no children is fine with that. She hasn’t ruled out adoption.

Brandi asks about her love life and Vivica says she wants a friend, a good partner and someone who has a lot of money (lol!).  She thinks he’s going to be from Europe. Holy gossip alert!  Vivica had a big fight with Jimmy Kimmel back in 2005 after he was talking smack about her good friend, Star Jones. Apparently, he will never have her back on his show as a result. Brandi offers to start a rumor that Jimmy is racist. Brandi says that Jimmy has “feminine eyebrows”(which she means as a diss, I guess). Brandi is angry that Jimmy had Eddie on his show and they talked shit about her (cause she’d never do that to Eddie).

This entry was posted in Brandi Glanville Podcast, Don't be Tardy. Bookmark the permalink.