At Tribal in the last episode the men’s alliance crumbled and Coyopa voted out John Rocker. Back at camp, Baylor is feeling good, along with everyone else except Dale. Dale is on the outs and realizes he is jeopardy of being the next person voted out. Over at Hunahpu, Natalie finds the lost flint! 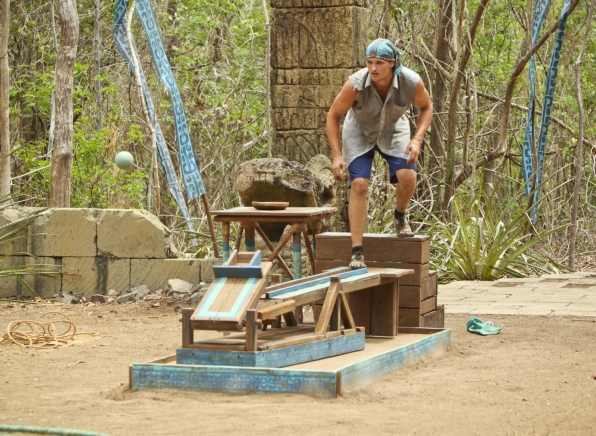 At the Reward Challenge, Hunahpu gets a look at Coyopa and cheers seeing John Rocker voted out. Drew then again tries to bargain with Jeff (it worked out so well the last time…not) and offers the never used newly found lost flint for some of the fishing gear they gave up. Probst shuts this down saying a deal is a deal, get over it.

The reward challenge is using a grappling hook to grab 3 bags of balls, and then using a catapult to launch the balls into 5 baskets. First person to get all 5 balls in the baskets wins reward.  After rock, paper, scissors Hunahpu wins and Jon volunteers and plays against Jaclyn. It is VERY close. Jon wins. He sends Drew to Exile Island with Jaclyn. Hunahpu pick the comfort items (reward from last episode: blankets, pillows, mattress etc) over the food reward.

At Exile Drew gets the clue for the idol and reads it to Jaclyn. In a conversation Drew reveals his master plan and lets Jaclyn know he is going to throw the next immunity challenge so he can vote out some of the girls on his tribe. He is convinced his tribe is riding his coat tails and it’s time to get rid of the snakes. (Every time I see this edit I start shaking my head…)

Meanwhile back at Hunahpu, Keith goes to the water well and scratches in the dirt looking for the idol. He doesn’t find it and determines that Jeremy (only other team member who has been at Exile) has it, and tells this to a group standing around in camp. The Fire Fighter Bro I Got Your Back alliance is up in smoke when Jeremy hears that Keith has painted the Idol Target on his back. Amazingly, Keith goes back to scratch around some more, and finds the idol! I can’t believe Jeremy didn’t use the 6 days to find it!!

At the Immunity Challenge, four tribe members will swim out to retrieve rings tethered in the water. Once the 4 rings are retrieved, the other two tribe members will toss the rings onto a post. The first tribe to land all 4 rings wins immunity. They show an aerial shot of this water challenge and it is huge! I tried to find that picture and couldn’t, but this swim has to be grueling! Drew is still saying his plan is to throw the challenge, but no one else is in on the plan, just Drew. Coyopa is ahead, Hunahpu is struggling. Drew is one of the ring tossers, and is either awful at ring toss or good at throwing a challenge. Coyopa wins! Probst makes the comment “Drew is single handed loosing for his tribe”. Note to self: Next time you plan to throw a challenge swear Probst to silence. But ever the optimist Drew says “I threw the challenge so we could vote some of these snakes off. If I don’t want to win, we aren’t going to win. That’s what makes me the kingpin of my tribe.” … I hear the fat lady singing Drew.

A defeated Hunahpu goes back to camp, and prepares for their first tribal. Jon proposes to oust Julie. Drew argues Kelley is the biggest threat. Jeremy thinks Keith is after him and he wants Keith gone. So in what looks like minutes the guys have nominated 3 tribe members for eviction. Drew reveals his master plan to get rid of Kelley to Natalie, and Natalie immediately goes to Misty and rats out Drew’s plan. Natalie and Misty target Drew.

Drew continues to argue his agenda to anyone that will listen, and eventually he is overheard by Kelley. Turns out Drew is right – Kelley is a threat to him now LOL! And they head out to council with no clear target but lots of choices.

This tribe has never been to tribal. Jeremy and Keith discuss their differences over Keith not discussing the idol with Jeremy before he said anything to the rest of the tribe. Drew throws out Keith’s and Julie’s names as possible votes. They just open the kimono and pretty much bare all their agendas! Natalie recaps and tells Jeff “We’re a hot mess!”

No one plays Immunity Idol. The vote is Julie – Kelley – Drew – Keith! … Drew is voted off with votes from the women and Jeremy.  Bye Drew. Probst sends them back to camp with these words of wisdom “A lot of information revealed, 4 people got votes and 1 absolute blindside. Was it brilliant or chaos?”

In the previews for next week they are playing with us and show Jeff saying “Drop your buffs”! Maybe … but I think it’s too early for a merge and we have a tribe re-alignment coming. We’ll know next week! Oh! And in his after eviction talking head, Drew is still clueless as ever, as he sits alone in the dark, King of the World in his head. 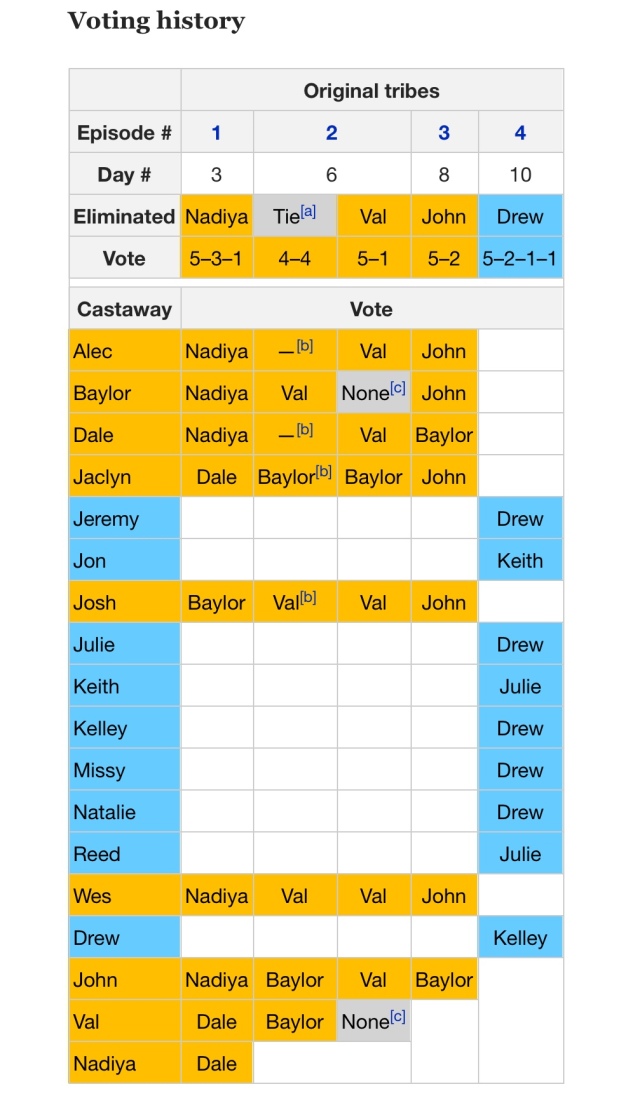 This entry was posted in Survivor and tagged jeff probst, survivor, survivor recap. Bookmark the permalink.