Real Housewives of Atlanta “Shades of Shade” by RamonaCoaster

Peter is taking Cynthia to a really dodgy area to scout places for the new Bar One.  Cynthia is going to partner with Peter in his new venture and she thinks now she’ll have a voice in everything he does.  You can have a voice but it doesn’t mean he’ll listen to it.  The place they see is rundown and the outside area looks like garbage dump but Cynthia sees potential and gets really excited.  The building behind the place is a funeral home where Dr. Martin Luther King Jr. was laid out.  From this piece of information they automatically feel the history of the place and they are thrilled they have a conversation piece.

Claudia visits Kandi’s office which seemed like a pretty random get together.  Kandi shows her newly constructed set for Kandi Coated nights.  Claudia is a fan of her show so Kandi would love to have her on as a guest and asks her if she is honest.  Claudia says she is painfully honest. Kandi asks if she’s good at oral. Claudia says she’s good if she likes the guy.  Let’s get real – as long as you’re not biting it off, there’s no way any woman would be bad, a man is just happy you are in that vicinity.  Kandi likes Claudia because she is someone in the housewives group that is a sex freak like her.  Claudia tells Kandi that Porsha and she hang out with the same African men.  Claudia drops hint that she wants to do Kandi Coated Nights with her.  Kandi wants to have a party with her female friends to talk about sex.

Phaedra wants to install a security gate in her house.  She asked the guys coming to give her an estimate if the gate can zap people.  One of the guys says she can’t shock people but she can put up a sign.  She’s a lawyer so she should know if it is illegal to electrocute people.  Apollo shows up and is ignored.  I think all the guys know who is signing the checks so they listen to Phaedra.  Apollo is whining again that he is not being listened to.  Now he is beginning to wonder if he’ll have a place to stay when he gets out.  Well, he won’t have to worry about that for a long time but in any case he might want to try finding some other sugar mama when he gets out.

Kenya is taking her aunt to get a natural beauty facial where they get to make their own masks.  Kenya says natural is always better.  Her aunt yells at Kenya for being shady when she mentions Nene doesn’t do the natural stuff.  Kenya says Nene does talk about getting botox, plastic surgery and liposuction, so if she talks about it is true and it is okay to mention. Kenya tells her she had drinks with Nene, Porsha and Cynthia and they reached a peace summit.  Her aunt says she has really grown as a person and thought she’d never see it.  I doubt this will last long.

Nene and Gregg are opening all the free stuff that she gets as a celebrity.  Nene is not into the sex toy she found in the box.  I’m guessing it’s from Kandi.  Steven, her manager, calls to give her exciting news about three offers to do Broadway.  We know she picks the role of the wicked stepmother of Cinderella.  We learn she is initially unsure of that part but her manager urges her to do something unexpected.

Todd and Kandi are working on an episode of Kandi Coated Nights.  We see some friction because they both like to run everything.  They start filming and the topic is business vs pleasure.  Kandi doesn’t mind mixing business with pleasure but the problem is she and Todd let business take over all the time.  She introduces Claudia on her show.  Kandi wants to know if Claudia gave Jamie Fox head.  Claudia says he treats her like a little sister and there have been no hanky panky.  Kandi then introduces a game “What would you do for the right price?” since Claudia was on the Price is Right.  She asks what Claudia would do for $500.  The answer is french kiss Kandi which seems to be the right answer considering everyone cheered, the other choices aren’t worth mentioning.

Cynthia and Peter meet the lawyer to sign the papers for the new location for BarOne.  They think the location will be the new Bourbon St.  They look back at their fights and arguments since they’ve been on the show.  I think it is too soon for Cynthia to be congratulating herself for still being married since she hasn’t been married that long.

Ayden doesn’t want his mother to go to an event but he lets her leave and finally goes with the babysitter.  The National Bar Association is giving an award to Phaedra as one of the country’s top attorneys.  Phaedra’s mother mentions that despite what is happening with Apollo, it’s great that she is getting an award.  Phaedra wants people to not associate her with Apollo’s behavior which was why she accepted the award.  She is happy that her peers are looking beyond her personal situation and focusing on what she has accomplished in her career.  I think people do feel sorry for her kids and her situation, not that she is getting a pity party.  It would be bad form to mock or taunt her for Apollo’s actions.

Kandi is making the final preparations for her party by having a semi nude woman on a table. I have no idea what she is doing there.  I don’t see sushi or desert or nothing. Carmon says there’s no bitches allowed at her party.  Todd says he thought they are all bitches.  Burn!  The ladies show up one by one including some of Kandi’s friends, specifically a friend named Cocha with blue hair.  Nene gives the cold shoulder to Claudia, Cynthia and Kenya.  Claudia has a stink face when she gets a cold greeting.  She then approaches Nene to ask her why she gave a cold greeting.  Nene gives the excuse that Claudia is associated with people she doesn’t like.  I think Nene doesn’t like that she is seeing a future Nene replacement.

They start playing a bondage game where they strap people that haven’t been getting along in together.  Nene isn’t cooperating and Cynthia isn’t happy about it.  Nene agrees to get strapped in with Claudia.  Kandi demonstrates with Kenya the fun of using straps to get closer in the groin area.  I thought the straps were supposed to be used on a swing.  Then they start introducing themselves and talk about their relationships.  Claudia has been divorced before and it disappointed her family.  Cocha has been in a relationship for a year.  Porsha is in a brand new long distance relationship.  Claudia in her TH says Porsha’s boyfriend is Nigerian and he is dating 20 other Porshas.  Demetria announces she is dating Roger Bob.  Interesting how she had to mention his name while no one else mentioned their beau’s name.  Cocha then asks her questions about how long she was dating Roger Bob.  Then she announces that she dated Roger Bob too.  Apparently it was at the same time.  Cocha found out he was dating Demetria when he was with her in Las Vegas so she must have known ahead of time she would reveal the news to Demetria at the party.  Everyone is stunned and quiet until Kandi asks Kenya to introduce herself.  I’m expecting Kenya to say, “I dated Roger Bob, too. Just kidding!”  Instead she laughs obnoxiously while Demetria gets up to leave.

Nene thinks there is something wrong with dating someone for 8 yrs and they are not going take the next step.  Big flashing neon sign!  Kenya mentioned that Roger Bob confirmed that Demetria was his lady. 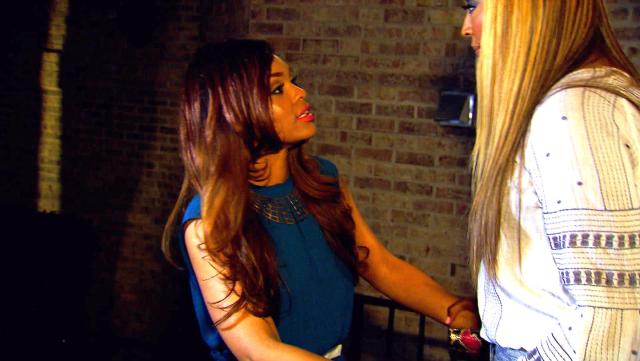 Cynthia talks to Demetria outside and Demetria thinks Cocha was lying.  She doesn’t want to believe that Roger Bob wasn’t true to her.  Love is blind.

Just a housewife ... who loves this place .... and loves to write ... You can reach me through this email: nomoredrama8@gmail.com. Lynn's Place is in tribute to Housewives blogger Lynn Hudson, who passed away in August of 2012.
View all posts by Veena (NMD) →
This entry was posted in Real Housewives of Atlanta and tagged kandi burruss, kenya moore, nene leakes broadway, phaedra parks, roger bobb. Bookmark the permalink.

276 Responses to Real Housewives of Atlanta “Shades of Shade”