Kenya and Cynthia visit Claudia in her apartment that is finally furnished.  The view is really nice.  Claudia tells the ladies about the party for Porsha that Dish Nation threw and she starts crying because the situation with Porsha reminds her of high school.  She tells them she told Porsha that she wasn’t sorry about mentioning the married African guy.  That’s not really taking the high road.  The high road would be not to mention the married African guy and not continue to say she would not use her vagina to get expensive things.  If you decide to be a housewife of any show, it most likely will feel like you’re in high school.

Todd is asking Kandi how she feels about her part in the movie that she will do some acting in Los Angeles.  Kandi wants to learn about movie producing so that she can make a movie one day.   Kandi asks Todd if he is going to party an extra day with his friends which is why he is packing a big bag.  Todd plans on going away for a week to get away for a while.  Kandi looks like she is about to cry and Todd says she just wants to argue.  Most of the time Kandi shuts down and doesn’t feel like arguing.  Todd is just twisting things around to make her feel bad.  I wouldn’t like it either if my man were to go away for a week when it wasn’t necessary.  It sounds like trouble. 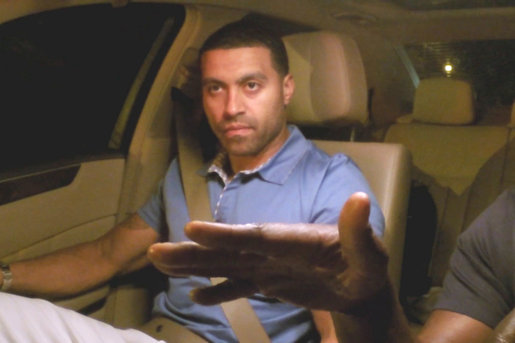 Apollo makes a huge revelation to Peter.  Apollo called him because he was about to flip out so Peter came to pick him up to take him out for a drink.  Apollo tells him he took a peek at Phaedra’s phone to discover that she is having an affair with an African guy named Mr. Chocolate.  Apollo shows Peter the texts between Mr. Chocolate and Phaedra that he sent to his phone.  He reads off the text messages “I love you,” “you’re my happily ever after,”  “this time next week I’m off the plantation,” “will you be my daddy as long as you promise to spank me.”    Andy on WWHL pointed out that anyone can fake a text in print which is what he showed to the cameras in his TH.  Apollo did ask her about the texts and she said he is no one and is out of the country.  He could be faking this storyline but who knows.  Apollo shouldn’t be talking about making a love crime and that people could die.  I hope Peter at least gives Phaedra the heads up that he is talking this way.  Nene does point out that Phaedra has a girlfriend who used to be an exotic dancer whose nickname is “White Chocolate.” 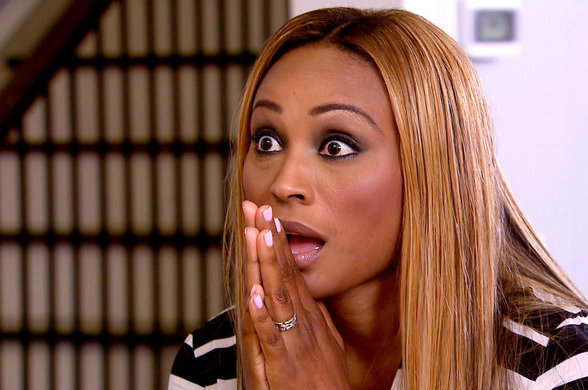 Peter comes home to tell Cynthia the news and she acts shocked.  Peter is giving her a way to confront Phaedra about Mr. Chocolate.  She got a storyline!  Cynthia didn’t think it’s fair that Phaedra gave Kenya and Claudia the “whore” stamp of approval when she may be the one who is cheating.

Claudia is afraid to wake up late for work and she is still stressed out with the interaction between her and Porsha.  I don’t think Porsha cares.

Kenya is auditioning actors for their parts.  I like that she had D. Woods from Danity Kane there.  I think she is really talented and very professional.  I don’t think she can play the older sister though.  D. Woods is 29 yrs old and Kenya is 44 yrs old.  Cynthia is auditioning and she came dressed as the character, a Jamaican beauty salon owner.  She tries to do a Jamaican accent and makes everyone laugh.

Claudia is at a business meeting with Rickey Smiley and he wants to know how things are going with Porsha.  Claudia honestly says things aren’t good.  Rickey wants someone to be the bigger person.  He lets Porsha in to sit in at the business meeting.  Rickey asks for gum and Porsha pulls out gummy bears.  Claudia thinks she is 5 yrs old.  I haven’t eaten a gummy bear since I saw Kelly Bensimon flip out on Scary Island.  I am afraid there might be some chemical in gummy bears that affects your brain.  Rickey brings up the tension between Claudia and Porsha.  Porsha says she wants Claudia to stop creating stuff.  They both want to squash the negativity.  They do a prayer circle and hold hands to pray to be better people.

Kandi is home from Los Angeles and she looks tired.  Carmon greets her who tells her she rode past her Mama’s house and there was a whole bunch of people in front of the house. From Kandi’s trip to Los Angeles, Kandi now doesn’t think it’s a good idea to do a movie with Todd.  Kandi wanted to ask a lady a question which Todd volunteered the answer to but she wanted the lady to answer that question.  Todd was irritated.  Kandi told Carmon they were married six months ago and they haven’t been having sex all that often.  They do it once a week and Kandi initiates it.  It’s almost as if Todd is trying to teach Kandi a lesson and trying to change her ways.  He doesn’t like that she doesn’t confront the situation with her mom, so he does the same by going away to Los Angeles. She’s too controlling so he tries to convince her to give up control over promoting her show A Mother’s Love to a promoter and that doesn’t work out.  Well at least he got a nice car out of the marriage.

Kandi does ask him if he is cheating.  Todd says he is not.  Kandi wants to go to counseling.  She’s been married six months and that’s a bit early.  Kandi thinks a good marriage needs good communication, good sex and good financials.  The only thing she has going is good financials.  Hopefully that doesn’t go down hill. 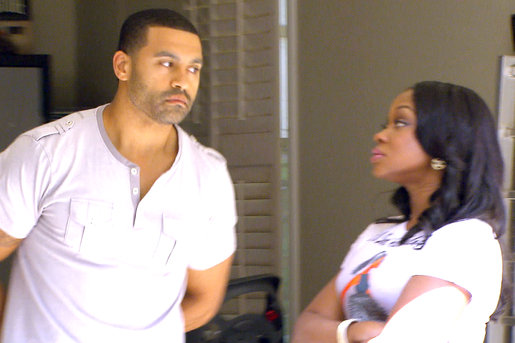 Phaedra has been staying at a resort with her kids because Apollo has been making threats to their safety.  She goes home the day he is supposed to report to prison to change the locks.  She doesn’t know who he gave the keys to the house to.  I don’t blame Phaedra for removing her boys and herself because safety comes first.  Apollo comes home while she is talking to the garage door opener guy.  He starts yelling, telling her she is crazy.  They are prepared to call the police if he goes ballistic.  Apollo asks Phaedra to make sure his clothes go back in his closet from the laundry room.  The dude doesn’t seem to realize he is going away for 8 years, not 8 months in Federal Prison.  I doubt he’ll be treated like Lindsey Lohan and get sent home early for overcrowding.  He could get some years off but who knows.  It’s his second tour in prison.  He won’t find his stuff at home when he gets out.  She may not be living in the same house if she is able to get his name off the title and sell it.  Phaedra called Apollo’s friend to take Apollo away.  Phaedra in her TH says Apollo has upset Aidan by telling him he is going to prison and the police may kill him.  Phaedra acted as calm as she could while Apollo ranted and raved and left.  But then he came and came toward her with a drill in his hand.  She is nervous and tells him to get away with that thing.  He asks her not to call the police.  Phaedra thought he needed to report on the date he was given but he said he had 72 hours from that date to turn himself into prison.  Apollo finally does leave and Phaedra decides not to call the police.  Phaedra tells Apollo’s friend to make sure he doesn’t come back or else she will call the police.  This episode was really intense.

Just a housewife ... who loves this place .... and loves to write ... You can reach me through this email: nomoredrama8@gmail.com. Lynn's Place is in tribute to Housewives blogger Lynn Hudson, who passed away in August of 2012.
View all posts by Veena (NMD) →
This entry was posted in Real Housewives of Atlanta and tagged apollo nida, phaedra parks. Bookmark the permalink.