Bloggers Needed at Lynnfam plus Real Housewives of Melbourne review

Lynnfam welcomes new and returning bloggers to take as shot at recapping any of the new or returning shows listed below.  Please send me an email if you are interested. nomoredrama8@gmail.com

Real Housewives of Melbourne Season One – Episode One – Three by Veena 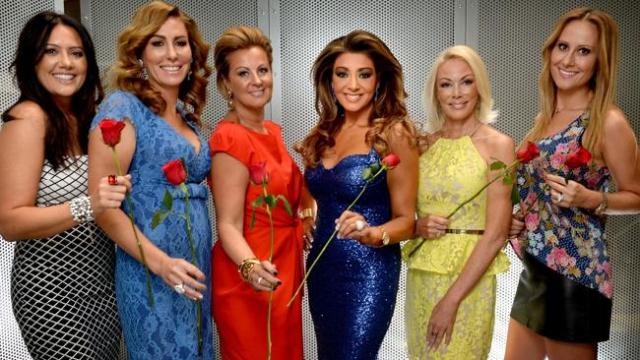 I’m going to recap Season one over the next few days to get us in the mood for Season Two. This is the second international franchise of the Housewives series I’ve watched (the other being Vancouver), and it only serves to remind me that there is nothing wrong with the formula for housewives – put six or seven Type A, rich, spoiled, insecure, and self-unaware women in a stressful situation and they are bound to crack.

The backdrop for this show is Melbourne Australia, which is described as the IT city of Australia.  For those of you unfamiliar with Melbourne, it is at the south east tip of Australia (south of Sydney).  PS – we have a poster from Melbourne – so I’m hoping she’ll give us some local color as the show airs.  I’ve only visited Australia once, and I was up in the Cairns area (access to the Great Barrier Reef).  We spent two weeks exploring at the end of the summer (right about this time of year 11 years ago).  It was hotter that you can imagine, but absolutely fantastic.  A little scary (poisonous snakes and frogs and killer jellyfish), but incredibly beautiful and interesting.  Of course the snorkling was out of this world.  But enough about me me me me me.  Let’s get on to these housewives.

Season One introduced us to five Melbourne socialites, and one transplant from Sydney.

Two new housewives will join for Season two – wiki describes them this way:

Episodes One through Three 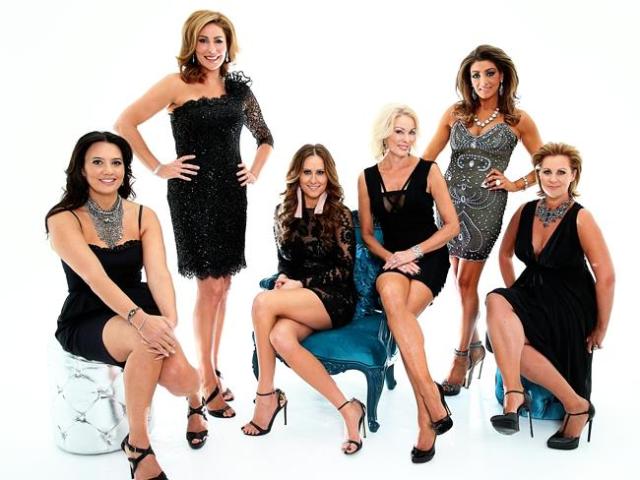 There are a total of 10 episodes in Season One, plus two reunion episodes.  I’ve watched the first three, and an planning on watching the remainder before the show returns on Thursday.

The main drama up until now has been between Gina and Jackie.  In the first episode, Andrea invited all the ladies to some sort of face product – plastic surgery branding party.  (They are all frantically branding – but I’ll forgive them – that’s a good reason as any to get on a show like this).  The party was a real snoozer, but they went out for dinner and drinks afterwards.  Up until that point the only one Jackie had met was Janet (Janet came for a reading.)  All of the other ladies knew at least one or two of the other ones – so Jackie is the odd duck out.  That’s just to say that Jackie was a little nervous and uncomfortable with the group – and she’s really not like the others – younger, no kids, not from Melbourne – not society really, just married to a rich rock star.

Gina was sitting next to Jackie at dinner, and bugged her for a reading.  Gina really wanted to know what was going to happen in her long distance relationship.  It was neither the time nor place for a reading – because it was in front of everyone, but after being asked a few times, Jackie asked Gina if she thought her partner was cheating.  Gina said yes, and Jackie said -there, now you’ve got your answer.  She also told Gina she was going to “dump his ass,” and that Gina’s mother and grand mother were behind her saying that.  It looked like Gina took the reading in stride (not at all like when Ramona was told that Mario was cheating).  But ….  that evening she phoned her partner to ask if he was cheating, and he flew her to Florida (first class) on the next available flight to spend the week together.  Before she left she called Lydia and told her that she didn’t believe a word of what Jackie said – or something to that effect.  Then back tracked and said Jackie has some credibility.

Lydia met Jackie at an art gallery because Lydia’s storyline is that she can spend copious amounts of money without blinking. She reminds me of a non-drunk Ronnie Negus at this point – please let first impressions not be true!  She immediately tells Jackie what Lydia had said, about not believing a word Jackie said.  Jackie is really hurt, and makes some excuse up and leaves.

Now let me explain that Jackie is not a wall flower.  She’s loud and in your face, just a little out of her element in this new situation.  Her best friend (and wedding dress designer) describes her readings as a root canal without novacaine.  After suffering though a branding lunch (with lovely food) for Chyka’s event planning business where the whole talk was on Gina’s words and whether or not Jackie’s reading offended Gina, she called Gina up and asked her for a coffee date.  Gina (at first) denies saying the words.  But when Jackie explains that she heard them directly from Lydia, Gina backtracks and admits it.  In her voice over she claims that she didn’t believe her partner was cheating so therefore didn’t believe what Jackie was saying.  She basically twisted her words.  Then Jackie points out that Gina seemed to believe that her mom and grand mom were standing over her shoulder saying those things (Jackie just being the portal) and Gina says that they weren’t spirits, they were demons.  Jackie is just floored, and shocked, and begins to cry, saying she channels spirits not demons.  Gina sits there with a shit-eating grin on her face and voices over that she won, but in the courtroom she stops when she sees tears in their eyes so she’ll stopped with Jackie.  I suddenly know who she remind me of – Brandi Glanville. Checkmate bitch.

Meanwhile – Jackie and Ben are planning a housewarming party – and this couple is just deliciously hilarious.  They want a Mexican theme (remember they are in Australia so Mexican food is quite exotic – we couldn’t find much of it in the stores when we were there but enough about me me me me) – but they don’t want it tacky like ponchos or anything – upscale rock and roll Mexican.  Their party planners stare blankly.  Then (and this sort of shocks me) Ben asks how much this party will cost – and they are quoted $300 a head, and they seem to think this is expensive.  40 people at $300 is $12,000 so I guess it is for a simple housewarming, but aren’t they supposed to be uber rich. I should clarify it shocked me that they asked – not the price tag.  Jackie doesn’t cook – she has nothing but champagne and eggs in her fridge – so they must eat out every day.

All the ladies bring housewarming gifts.  Lydia and Andrea are the most ridiculous – they went shopping together and settled on a pair of Indian Headdresses.  Please please please tell me that they didn’t know about the Mexican theme and the two things were unrelated. Ben (who I have a big crush on) loves his and wears it the entire night.  Chakra gives a nice gift basket (branding) and Andrea snarks about that.  Jackie voices over that no one should talk smack about the gifts people bring – it’s just not polite.  I think I’d rather have a nice gift basket of home stuff than a Indian Headdress.  Gina gives jewelry – and Andrea snarks about that.  Janet gives a nice cross / decorative piece.

Jackie – for most of the party – had been ignoring her issues with Gina and was being a great hostess – but of course at some point it all came up again.  This time all three – Gina, Lydia, and Jackie – were in the room, so Jackie brings Lydia over to confirm what she had told Jackie.  Lydia confirms it without blinking an eyelash.  Gina is sort of stuck, and she starts saying that repeating words is like playing a game of telephone – the meaning gets changed with each person.  Only the meaning didn’t changed and she must have not realized her phone call was taped.  Unfortunately the producers don’t cut in with the actual words this time, but suffice it to say Gina is a lying meanie pants.  She back tracks, deflects, and tries to wiggle out of it – but the world now knows that she lies.  That can’t be good for her career.  And with that recap, it’s time to watch episode four – where Lydia and Gina’s relationship will take a turn for the worse, because Gina will blame Lydia for the mess Gina got herself into.  Oh, and she did dump her partner – so Jackie was right!

Other interesting thing – Lydia and her hubs fly to (I think Tazmania) to buy cheese at a famous cheese shop.  I guess they don’t have mail order.  Anyhow, they select what looks like a grocery cart full of cheese wheels and blocks – and the price tag is something ludicrously low like $300. It was enough cheese to feed an army.  I now have the craving for cheese.  When I was in Italy we went on a hike with my Aunt and her partner near Monte Baldo, above lake Garda.  We stopped at a mountain hut for lunch – organic and local ingredients with wine) and a snack at a farm where they made cheese and cured meats.  I’d fly to Italy and do that hike again just for the food – but enough about me me me me me.

Just a housewife ... who loves this place .... and loves to write ... You can reach me through this email: nomoredrama8@gmail.com. Lynn's Place is in tribute to Housewives blogger Lynn Hudson, who passed away in August of 2012.
View all posts by Veena (NMD) →
This entry was posted in Real Housewives of Melbourne and tagged Andrea Moss, Chyka Keebaugh, Gamble Breaux, Gina Liano, Jackie Gillies, Janet Roach, Lydia Schiavello, Pettifleur Berenger. Bookmark the permalink.