(how’s that for alliteration?)

The segment opens with a rerun of Petti storming off saying the ladies were disgusting and that she wasn’t drunk…Jackie screaming about her taking a lie detector test and the ladies laughing, and Lydia (perhaps the guiltiest HW of all) gets up from the couch to go back there and pet Petti in an attempt to get her to pitter patter back on stage…

While she is still telling Lydia to leave her alone, the girls are laughing and Gina points to backstage and says “She’s ranting…” and the asks “What happened to her?”

Jackie and others try to fill in Alex on what really happened to start the brouhaha… apparently Petti had been digging at Gina all day and accused Gina of not being a barrister because none of her friends had ever heard of Gina… and the ladies agree they were having a conversation and not an argument…Petti is backstage insisting that everyone is lying about her and she WILL NOT STAND FOR IT…Janet tells Alex that for all the remaining ladies on the couches to agree – that he should know they were telling the truth…Petti is saying she cannot respect people who are lying.

Alex listened not-so-intently to Jackie and went backstage and get’s involved in convincing her to come back to the show and in the background of that conversation all we hear are the other ladies saying things like “she was plastered”…”she was a pain in the a$$”…”she was walking up and down the street yelling like a gypsy”…”she was banging and pounding on the doors of some of the rooms.”

Personally I think the Diva behavior is a bigger pain in the a$$, but there will be a moment later on that even beats this DIVA moment by the Head Diva Lydia…but the last snark before Petti returns was from Janet who said to Chyka and Jackie…”Get the other f-ing leg to your outfit, all right?”…Chyka laughs. (Petti’s outfit it is a one legged jumpsuit with a flowing skirt slit up the front…not at all attractive.

Pettifleur, still looking picked on, re-joins the group and Jackie launches straight into an attack, telling Petti, “I don’t want you to feel upset but I don’t appreciate your saying that I’m lying.”  Janet adds her 2 cents about “lying about not drinking” when Alex jumps in with, “Can everybody shut up for a minute” which, didn’t do much if anything to stop the chatter, but they did knock it down to a low roar…Janet says she doesn’t even think Petti is crying..Chyka laughs…

Gina tries to help the explanation along by injecting “she doesn’t mind going commando but she’s embarrassed about being drunk?”

Petti insists she only EVER drinks “two glasses max”. (Honey, I know the measurements are different over there with that silly metric system and all, but be reasonable…HOW BIG WERE THE GLASSES…I liter, 2 liters? Janet saying everything Petti is saying is a lie…Petti is talking over the top of Janet (which is hard to do…) and says she is not going to talk about it any more…riiiiiiiiiiiiiiiiiight!

Alex says he is going to have to shut this subject down…and in his infinite wisdom, says let’s get back to where this started… asking Gina if she called Petti the C-word and was there any nail gouging? Gina said yes, doesn’t think she called her that did she, but she called her all sorts of things! Jackie says yes she did call her that…Gina said she was being a pain and she just wanted her to keep quiet…Chyka just shakes her head in dismay…Alex asks again “Nail gouging?”, Jackie answers yes, Gina answers I squeezed her arm and said be quiet. (There ya go Chyka who says Gina never owns anything!)

Alex says the next topic is racism which was a hot topic with all the ladies and the viewers as well…Petti says “AH…don’t go there.”

A montage featuring all the housewives taking turns at picking on PF’s accent and heritage, was played, but meaningless because Petti doesn’t know the difference between mimicking and mocking (trust me, I had to remind her myself on Twitter!)

Alex gave Petti a lead in to talk again about her upbringing and she tells him “it feels awful” when people tease her about her accent. Gina insists that teasing someone about their accent isn’t racism, Chyka think it’s quite “condescending, and DIVA Lydia must have forgotten when she agreed with Chyka that she made fun of Gamble saying Hawthorne, AND called Petti a Mongrel!  Petti says these girls think I have an accent now…well 30 years ago I had a thick accent…Gina says…”We think she does? She does!” Gina then asks “What is racist, that we say you have an accent and you do?” Chyka says something and then Gina says “It’s not racism – it is the way you speak!” Now Petti tries saying if they were mates it would be ok…Gina says I thought we were mates…we just didn’t click as good friends. Can’t write more about this I have been doing it all season…nothing will change Petti’s understanding of it.

The next montage is of Jackie’s only storyline in Season one about being psychic, continued into Season 2 with Chyka’s help…and Jackie has now escalated it to them attacking her profession…blah blah blah…and her analogy is she could have made fun of Gamble’s paintings saying they looked like a 5-year old did them…but finishes with she doesn’t throw shade at people…riiiiiiiiiiiiiiiiight!

Alex says the ladies are ladies…but don’t always act ladylike and could make a sailor blush…the next montage starts about all the ‘catch phrases’ and ‘sexual innuendo’ the ladies use (and these clips we will never be able to UN-see…since they are now etched on our retinas) while winding up with a wonderful montage of Gina adjusting ‘the girls’ throughout the season. 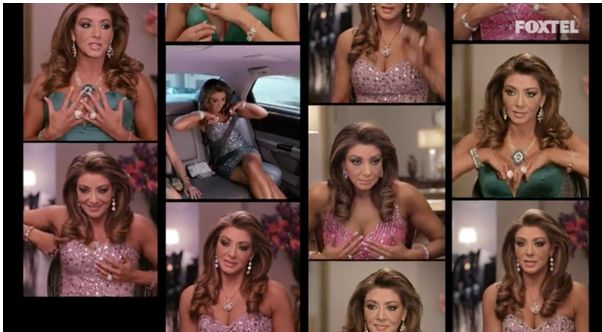 After watching the clip, Gina adjusts ‘the girls’ again on camera and says “Here is something for your Montage!”

Rick joins Gamble on the couch and they talk a little about their relationship, they met on e-Harmony.com, have been together for 5 years, and when asked about the wedding, Gamble and Rick announce that their wedding will be in September and will probably be filmed in Season 3. (I REALLY LIKE THESE TWO). Everyone notices Rick has lost weight, and Chyka comments on Gamble serving him only frozen peas, and Wolfie Pup going out at lunch for a big ole greasy burger. He clearly loves her and she clearly loves him – GOOD ON THEM!!! Gamble says this relationship is different from any other one she has had because Rick is not a psychopath! 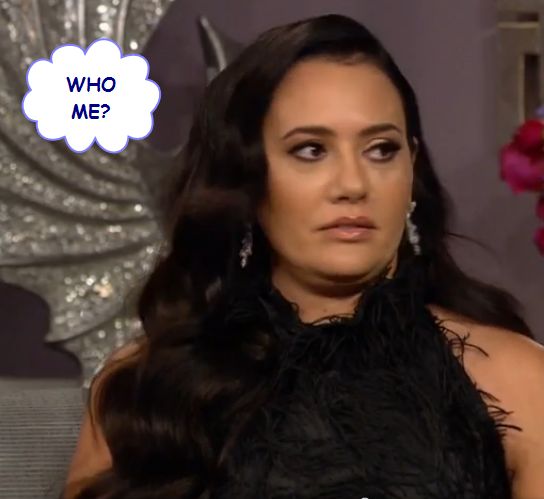 Only the good Lord knows why Alex then brings out MANuela who walks right over across to the far couch and wants to sit next to Alex (IN GAMBLE’S seat…and hence, meaning all the women should slide down one seat.

Nay nay my little friends, LYDIA DIVA refuses to be slid to the end of the couch, and says so out loud!

MANuela walks in and shakes hands with Alex and then points to Gambles seat and asks “Where am I sitting?” 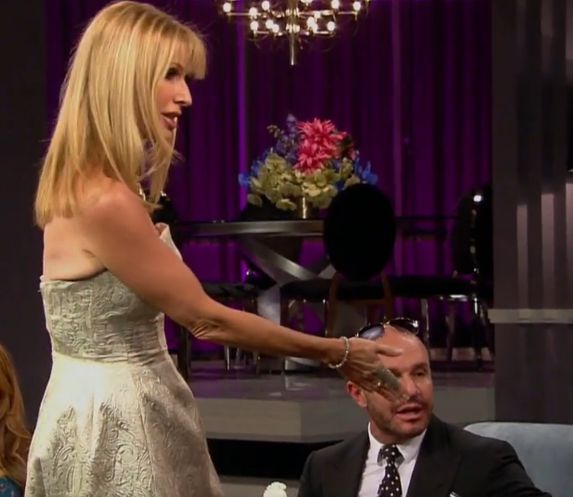 Lydia says “NO NO, I’m not going to the end”

After a couple of awkward moments with MANuela and Lydia, Gina gets up and moves to the other side of Lydia and Gamble slides over (which she NEVER should have done because it is what MANuela wanted to intimidate Gamble further).

MANuela and Gamble of course have words and they show a montage of the different places she was on the show and how aggressive she was towards Gamble. Alex had a FB question or asked the question (I forgot which) about MANuela wanting to take Gamble’s spot on the show to which she tosses her head (not far enough) and says she doesn’t want Gamble’s spot (riiiiiiiiiiiiight)…(I am guessing she will get Petti’s spot because she has been campaigning for her own spot all season…and Janet will gain an ally to replace Petti who she obviously has kicked to the curb).

MANuela was downright rude to Gamble during her short stay on the couch which then precipitated an under-her-breath comment from Gamble to MANuela, which is the opposite of a comment that factually described how crapppy MANuela actually looked at the reunion (Rode hard and put away wet)…YES LADIES I AM SPEAKING OF HORSES! Geez, don’t get your knickers in a wad…I don’t talk like what she said because I’m a lady DAMNIT!

A short segment on Gina rumors…where Gina has to explain AGAIN, that going to the source and asking a question is NOT brandishing rumors all over the place.

The next issue is Gina and Janet resurrecting one of their beefs,Janet wants to put gaffer’s tape over Gina’s mouth , Lydia putting her hand in front of Gina’s mouth, and Chyka chiming in about Gina not owning her actions or apologizing for them, and Gina explains why she says some of the things she does IN CONTEXT to what was actually happening (which the rest of the ladies never consider)…and ends with she isn’t going to apologize for anything offensive she has said the entire season! Janet starts whining and sliding off the couch screeching “For Christ’s sake just apologize and shut up!” (My thoughts about you exactly!) 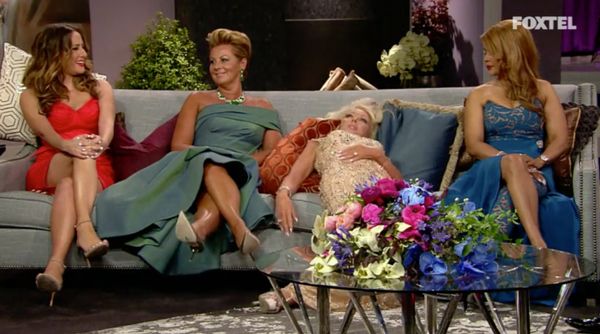 Alex asks the ladies what they have learned this season… 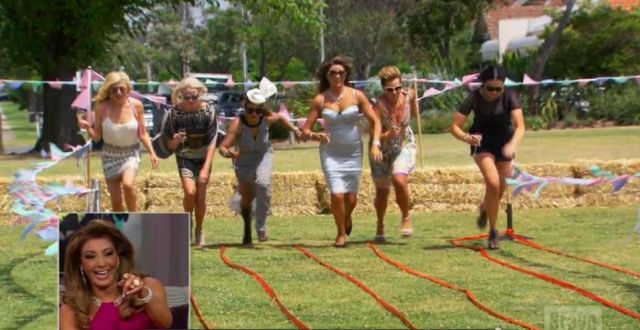 Lydia screams I WON, and on a DC says Of course I won, I was the winner…(wiener is more like it…you are the youngest, you should have won!) 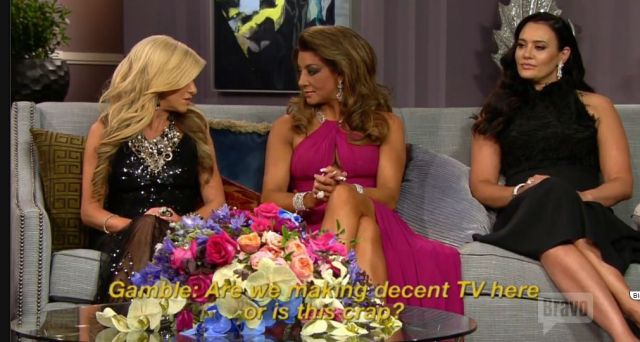 Lydia says “I’m getting quite bored here…and Gina concludes the season by reminding Lydia of her faux pas on floor counting when she says…OK 71th!

I want to thank Veena and y’all for allowing me to blog over here and recap this season, I have had nothing short of a blast…and I have one last blog of the TWITTERFEST and POSTMORTEM of the entire season…that I would like to do for next week since we have now seen it all and heard it all.

Just a housewife ... who loves this place .... and loves to write ... You can reach me through this email: nomoredrama8@gmail.com. Lynn's Place is in tribute to Housewives blogger Lynn Hudson, who passed away in August of 2012.
View all posts by Veena (NMD) →
This entry was posted in Real Housewives of Melbourne. Bookmark the permalink.