Viewers of the Real Housewives of Miami have seen both James Davis and Elaine Lancaster on screen.  Elaine Lancaster is the over the top, statuesque blond Drag Queen Diva.  James is the actor who created and plays the role of Elaine Lancaster.  Both are fiercely loyal to Lea Black and at odds with Marysol Patton and her mother Mama Elsa.

Some quick background:  James Davis moved to South Beach Florida in 1997 from Dallas to pursue a career in acting.  His act.  A vivacious drag queen pulled straight from the pages of a Jackie Collin’s novel.  Literally.  He combined the names of two fictional divas from the novel “Hollywood Wives”, and created a persona that was born in the lap of luxury, pampered by all, and spoiled rotten according to her website.

As viewers saw on this season of the Real Housewives of Miami, Elaine is an act that James has perfected over the years.  James discusses this in an interview he gave to South Beach Magazine.  Read the interview here.

James was gracious enough to agree to an interview for the blog.  You will find it below.

1)      You are an actor who has played the same role (Elaine Lancaster) for many years.  When you are on camera filming a reality TV show, how difficult is it for you to differentiate what Elaine would do versus what James would do in a given situation?  Take for instance your interaction with Beau at Lisa Hochstein’s party.  Would Elaine have acted any differently than James did?

That’s a great question. Elaine is innately No Nonsense Lady and I’m a gentleman who treats everyone with respect until they stop treating me with respect. There lies the difference. It’s all about mutual Respect. I’m as Nice as people let me be. If I had been at Lisa’s party as Elaine, Beau would have never messed with me. Elaine is a tad bit more intimidating.

2)      Elaine (and James) have been in many scenes of the Real Housewives of Miami, and have had more of a story line than some of the “official” housewives.  Were you expecting to be an official “housewife” while season was being filmed?

When did you learn about your status as “friend of a housewife”?  Was there any reason given for that decision?

I would have liked to see a lot more of Elaine and I certainly know she is much more interesting, but I was always aware of her being a ‘friend of the wives’ and never a ‘housewife’.

3)      You have been vocal about a conflict with cast-member Marysol Patton.  Did you know Marysol before filming Season 1 of the Real Housewives of Miami?  Can you tell us a little more about what happened between the two of you?  What is your relationship with Marysol today?

I have been placed in a defensive mode with Marysol because she doesn’t generate any light and has to either bask in or attempt to dim others. When I arrived in Miami the summer of 1997 I became a huge social sensation and unapologetically so. My presence is either Applauded or hissed but never indifferent.

There is much that can be revealed about a person’s emotional/ psychological  makeup when Elaine Lancaster is in the same room. Insecure people like Marysol hate me because I have something they do NOT have or  can’t be bought, Genuine Personality.

4)      In one of the most awkward scenes of the season, Elaine sat down with Mama Elsa and she started to yell at her.  Can you tell us what was going through your head at the time?  Did you interact much with her during the remainder of the season?

I can’t blame Elsa for her rudeness.  She was just reacting to me because her daughter is a professional Fabricator and a mother wants to believe what their child tells them even if it’s a lie.

5)      I follow Elaine’s twitter timeline, and as the first episode of Lisa’s party aired, you mentioned that James went to the party because Elaine only comes when she is paid to make an appearance.  That left me wondering if Elaine was paid to make an appearance the other times we saw her on screen.  For instance she was at Lea’s house during the Norman psychic reading and at Blacks’ Gala.  Were those paid performances, or do you make exceptions for Lea’s events?

That is true. Elaine Only shows up to event’s where she is being paid to appear. When you see me in episode 3 where I arrive to the charity meeting as Elaine, I was on my way to a paid event. Then at Lea’s for Norman I was on my way afterward to emcee & perform at corporate event.  It takes too much time & energy to be Elaine all the time & frankly I need my time away from her. LOL

6)      I find it interesting that you introduced viewers to the man behind Elaine.  It was comparable to seeing a housewife without her makeup and expensive clothing.  Did you have any trepidation about filming as James?

Yes I did. I have always, prior to this show, maintained a Separation between Church & State so to speak.  I do not care to live in the spotlight; it is just where I choose to work.

7)      James had a conflict with Beau Beasley at Lisa’s party when Beau was rude to Lea Black. Viewers noticed you leaning in and whispering something to Beau before you pushed him in the pool, leading us to wonder if the scene was a “set up” to create drama. 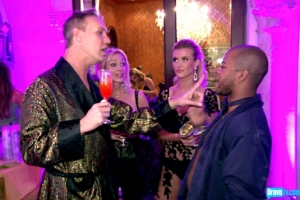 What did you whisper to Beau?

I leaned in and tried to explain to him that he was drunk & making a fool out of himself. That is when he chose to throw his champagne on me & I on him – but added a SPLASH on the side.

8)      I’d love to see you on Watch What Happens Live.   Any word on whether Elaine or James will make an appearance?

I would too.  It would be Elaine since she is much more exciting than I.

For me, keep working on my various projects, continue with my voice classes, continue to volunteer for my select pet charities and focus on living a productive, happy life, take care of myself, friends & family.

Elaine has a new Mineral base/ Paraben free provides ultra shine to lips day or night. Contains vitamin E which helps to keep the lips Moisturized all day.

Sexy Shine and Rich Luscious Color. Extremely Versatile may be worn alone or over other lip products for Temperature rising drama. Made for All.

Available through the internet only at this time. To order contact : Taissia@MissElaineLancaster.com